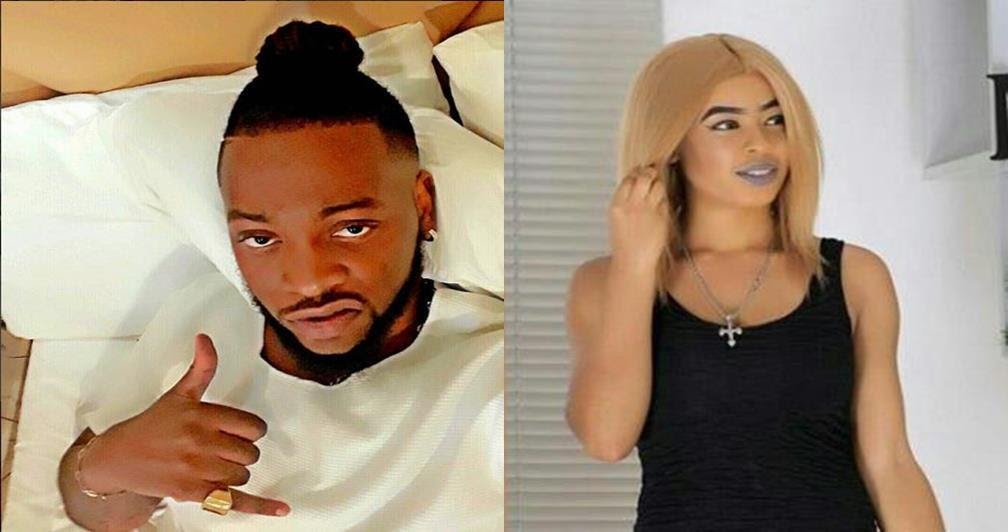 Viewers of Big Brother Naija 2018 reality show have reacted to the display of Nina’s pants on national television by Teddy A.

Teddy A is officailly the oldest housemate in the reality television show, was caught on camera displaying the underwear of a fellow housemate, Nina.

Teddy A shocked the other housemates when he appeared in the sitting room holding female pants on a hanger.
The Lagos-born housemate then started asking for the owner of the pants.
Teddy A said, “Who owns this?

At a point, Alex rushed up to have a closer look, after which she said it wasn’t hers. Nina, however, accepted being the owner, saying, “Its mine.”
This, the housemates received with displeasure, blaming her for dropping her items carelessly.

Teddy A added, “You are always forgetting pants, bra any ways. You leave pants around.

Here is how Nigerians reacted on social media:

@MbalienhleMahl “Are we bringing this up again? Yes we love and support Teddy A, he brought out the underwear, so what do we do? Cry?”

@daraxfiles, “Bringing this to the public? Their life is public; everything they do is in public.”

@holusurlar “It is wrong but you have not see anything wrong about the other HMs especially Miracle and Nina. Everything they do in that house is perfect. You guys always pick on someone’s mistake and to you, it’s okay that Nina is dropping her underwear anywhere she likes?”

@_Kanyin_sola, “It is because is Nina. If it was Cee c, you all would say how can she be careless to drop her underwear where Teddy had access to it. When you like somebody you defend them by all means.

@LIFE1326, “Your concern should be, under what circumstance did he bring out the pants? So showing my fellow housemates something for clarification is now public? Did he bring it to eviction stage? Mind your language.”

@KenniesYounglek, “All I know is that if the show it’s truly based on intellectual and Education, it’s between Tobi and Tolu.
“Because I never see more from the Miracle that you guys were voting for except that he won HOH challenge twice.”

@Rzilight @Rzilight, “Tobi has called Nina attention to her smelling pants before. I think Nina should understand the basic rules of underwear and do better. She is not the only female in the house it’s a public house not a personal one, I am not supporting both Tobi and Teddy A but Nina gave them the room.”

@candyhps, “No matter what you say trust me his fan base will keep increasing, did you post when Tobi said Nina’s pants smelled? We know Teddy respects women so please talk something else. We will continue to vote him, I don’t blame you.”

@Gem_Vertex , “You guys just realized that Teddy A is no respecter of women, this is the third time I have noticed it, forget the pretence of being a good guy it’s all a game. Now at all cost I want Rico and Nina 2 wins the money no play.”

I’M giving all my love to my dogs- Reality star, Erica tells Nigerians

Ifeoma Ngozichukwu - October 18, 2021 0
The beautiful reality star, Erica reveals why she is giving all her love to her dogs. The reality star took to twitter as she...

Violette - June 1, 2018 0
Fans of Big Brother Naija of Cynthia ‘Cee-C’ Nwadiora have created a picture of her meeting the All Progressives Congress national leader, President Muhammadu...

Violette - November 22, 2019 0
Popular Nigeria Disk Jockey, DJ Cuppy has reveal that she's the most followed African DJ in the world. With the continent blessed with so much...

Violette - January 24, 2020 0
American female singer and songwriter, Solána Imani Rowe, popularly known as SZA, has got her fans on social media on their toes after she...

Violette - February 13, 2020 0
The Broom Challenge that has been trending on social media has taken a new twist as Tiwa Savage accomphish the task. Broom challenge which has...