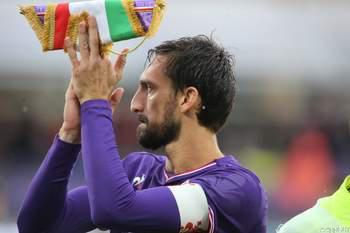 Fiorentina have confirmed that club captain Davide Astori passed away suddenly on the eve of his side’s trip to face Udinese in Serie A.

The 31-year-old centre-back had been capped 14 times by Italy and had enjoyed a professional career spanning 12 years.

“Fiorentina are profoundly shaken and forced to announce that their captain Davide Astori has died,” a statement posted on the clubs official website reads.

“For this terrible and delicate situation, and above all out of respect for his family, we appeal to the sensitivity of the media.”

READ ALSO
Princess Onyejekwe And Non-Fan Who Said No One Knows Her, exchange words on instagram

He started out at AC Milan, where he never played a Serie A match, before moving to Cagliari, the club where he made his big breakthrough. He turned out 174 times for the Sardinians in a six-year spell, during which he made his national team debut.

Udinese have confirmed that the fixture they were scheduled to play against Fiorentina on Sunday has been postponed as a consequence.

#LagosAPCPrimaries: Ambode has done well as governor but he’s not a good party man...

Violette - July 2, 2019 0
Today, the national leader of the All Progressives Congress, Asiwaju Bola Tinubu, said that though Lagos State Governor Akinwunmi Ambode has done well in...

Johnson Olumide - February 16, 2021 0
You have just been asked in an exam to write the names of the 50 most popular women in the world, what will your...

Fly an Unregistered Drone In Ghana and you could bag up to...

Johnson Olumide - July 8, 2019 0
Well the Saying that were there is no law there is offence or jail time, simply put Law and Order works hand in hand...

Wizkid completes mega deal signing with UBA as an ambassador

Violette - July 28, 2019 0
Vocalist, a singer and pop artiste Ayodeji Ibrahim Balogun, prominently known as Wizkid has finished the marking of a mega-deal manage of United Bank...

Dabota Lawson reflects on her Amazing 2016-“We made it baby girl, we did good...