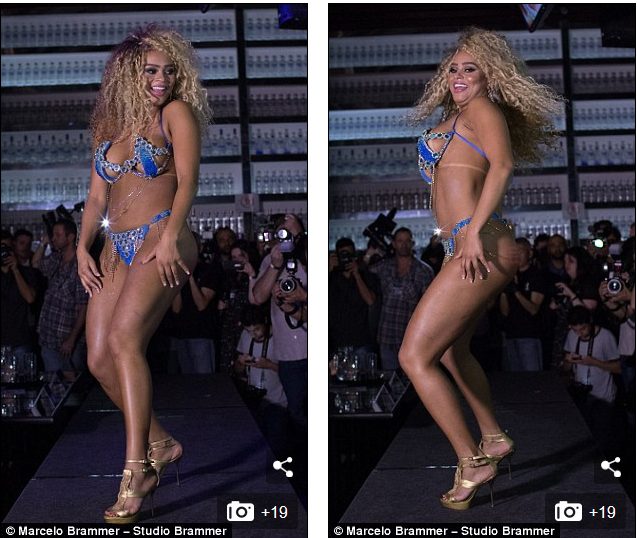 A former winner of the ‘Miss Bum Bum’ beauty pageant is suing Cristiano Ronaldo over claims she was sexually harassed and trolled after splitting with the football star.

Brazilian beauty queen Erika Canela, 26, claims she was sent ‘offensive and insulting’ messages when she ended her two-month relationship with the Portugal captain.

She says she received messages from the Real Madrid forward that called her a ‘w****’ and said he would ‘ruin her life’ but did not know if they were from him or someone else. ‘I stopped eating, I couldn’t sleep and didn’t want to go out any more’ she told the Sun on Sunday.

Her lawyers have launched a ‘cease and desist’ case against the striker and may seek damages over claims his actions were ‘humiliating’ and have ‘profoundly affected her emotional state’.

READ ALSO
Fuel scarcity hits U.S, citizens spotted buying fuel in plastic bags and kegs (Photos/Video)
Miss Canela, who has a 42-inch bottom, says she ended the brief relationship with Ronaldo, 33, when she found out he had a girlfriend.
She had previously said she was surprised when the football star contacted her, and that she thought ‘he’d be more interested in Barbie-type models’ not ‘big-bottomed Brazilian women’.
The 26-year-old gained fame when she became the first black woman ever to win the ‘Miss Bum Bum’ title in 2016, a Brazilian contest that searches for the best bottom.
She shot to overnight fame in her native Brazil and won £18,000 and a string of lucrative modelling contracts.
READ ALSO
Video of Cristiano Ronaldo enjoying Leg Massage from his GF goes Viral

Her new found game gathered the attention of the former Manchester United player and she claims he invited her to his homes in Madrid and Lisbon to sleep with her.
Since becoming Miss Bum Bum she has starred on the cover of Playboy in Portugal, and posed naked for the magazine’s Venezuelan edition.

Johnson Olumide - May 12, 2020 0
Nina’s manager has finally broken his silence after Miracle issued a statement dumping his romantic interest in the house. Speaking with Sunday Scoop, Nina’s manager,...

Violette - March 1, 2021 0
The Golden Globes have built a well-deserved reputation over the years as Hollywood’s drunkest awards show, and there’s no reason to think that this...

Tonto Dikeh tried to bring me down but it failed, got more jobs instead...

Johnson Olumide - April 8, 2018 0
Nollywood actress Rosaline Meurer, has spoken again about the issue which eventually brought her to the limelight. Recall the actress was fingered as the one...

Johnson Olumide - May 12, 2020 0
I Want Sex Three Times a Night: ‘If You Can’t Hang, Goodbye' - Nicki Minaj Nicki Minaj knows what she wants. After rapping about wanting sex three...