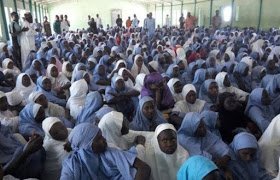 The Nigerian government has now confirmed that 105 girls have been released from among 110 kidnapped in Dapchi, Yobe State.
According to Sahara Reporters , reports that 105 girls have been returned to Dapchi, with the remaining 5 said to be deceased.
The insurgents reportedly returned in the 9-vehicle convoy with which they came to abduct the girls. Residents of the town reportedly fled the scene, but the insurgents only dropped the girls off before leaving.

UPDATE 2: 104 DAPCHI GIRLS, 2 OTHERS FREED UNCONDITIONALLY
A total of 106 abducted persons,
comprising 104 Daphi schoolgirls, one othe girl and a boy were freed
by insurgents in the early hours of Wednesday March 21, 2018.