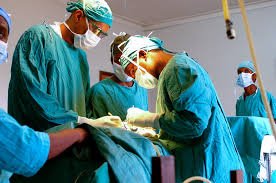 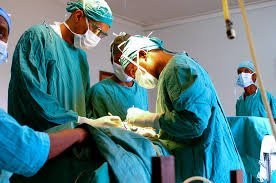 In what can be best described as a nightmare, some Kenyan doctors from the Kenyatta National Hospital have carried out brain surgery on the wrong patient. They only found out the error after opening the male patient’s skull.
The daily Nation reports that:
“Two men had been wheeled into KNH unconscious last Sunday. One needed head surgery to remove a blood clot in his brain while the other only required nursing and medication to heal a trauma swelling in his head, medically known as closed head injury.
“However, a horror mix-up of identification tags saw the wrong man wheeled into theatre and his skull opened.
“Doctors did not realise the mistake until hours into the surgery, when they discovered there was no blood clot in the brain of the man sprawled on the operating table.”
The hospital in a press statement signed by its Chief Operating Officer, Lily Koros announced that it has suspended the 4 health workers on duty that evening including the neurosurgeon, the ward nurse, theatre receiving nurse, and the anaesthetist.
It also states: “The management has suspended the admission rights of a neurosurgery registrar and issued him with a show-cause letter for apparently operating on the wrong patient.”
This suggests that the patients were wrongly identified. In a shocking twist the patient that was initially meant to have surgery is now reported to be recovering quickly and might not need it anymore.
Meanwhile, the patient wrongly operated on is also reported to be recovering well. Perhaps, it is time for patients to start asking more questions in relation to their treatment before they experience such terrible mistakes or what do you think?

Johnson Olumide - July 2, 2018 0
For years they have both denied having an affair but all that seems to be gone now as they both showed their love for...

Johnson Olumide - November 16, 2020 0
Nollywood actress , Adaeze Eluke fired warning shots at Nigerian Gay/Bisexual men as she claims she has nothing against them while telling them marriage...

Adedokun Moses - December 12, 2019 1
Go-to school, study hard, bag a degree and get a job! That’s probably the most used line parents drilled into their kids in their...

Johnson Olumide - November 17, 2017 0
The tennis superstar and the Reddit co-founder tied the knot in New Orleans on Thursday (16.11.17) at a star-studded ceremony which featured the likes...