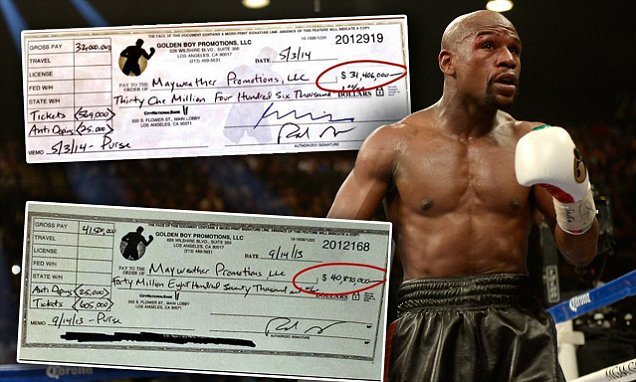 A new report has revealed the net worth of undefeated former boxing champion, Floyd Mayweather.

Retired boxer, Floyd Mayweather Jr is widely considered as one of the greatest boxers of all time. He made his money by fighting in the ring. He retired undefeated 50-0 professional record.

Mayweather who was born on February 24, 1977 in Grand Rapids, Michigan is also considered to be one of the richest men to grace the sports.

Floyd Mayweather gets a new private jet as his birthday gift! (Photos)

Floyd Mayweather’s net worth is almost entirely the result of his phenomenal success in the boxing ring.

Over the course of his undefeated boxing career, Mayweather has amassed an incredible fortune by winning a number of key boxing matches against opponents,

Apart from boxing, Mayweather has earned about $25 million from small endorsement deals and merchandise sales. He also briefly appeared in the WWE in 2008.