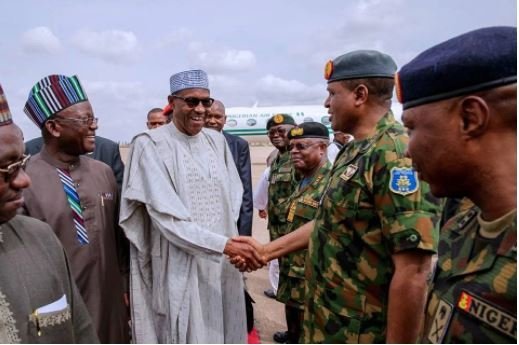 He also warned those who described as “politicising” security issues, saying the security agents would “deal with” them.
Buhari made the pronouncements on Friday during the reception held for the released Dapchi girls and their parents at the Presidential Villa, Abuja.
The President said,
“The security services have since been directed to put in place further measures around all schools vulnerable to attacks to ensure the safety of our pupils/students and teachers and school workers.
“I have tasked all the security agencies to work to ensure that we do not witness any recurrence of these incidents.
“Security chiefs have been warned in clear terms that any lapse on their parts will be viewed seriously,” he said.
As for those who he referred to as “politicising the security situation in the country”, Buhari urged them to “desist or face the wrath of security agencies.”
“This country has suffered enough of hostility. Government is therefore appealing to all to embrace peace for the overall development of our people and the country. May I also warn against those elements who have chosen to make political fortune of our citizens’ misfortune.
Government would not tolerate any attempt by any person or group to trivialize or politicize security issues for politically motivated ends. Accordingly, security agencies would not hesitate to decisively deal with such unscrupulous characters”.
President Muhammadu Buhari made all this know to everyone present while receiving the Dapchi schoolgirls who were released on Wednesday by Boko Haram.
According to reports, Mr Buhari is meeting the girls at the press gallery of the State House presidential villa, Abuja. Some top government officials and security chiefs joined Buhari at the meeting.