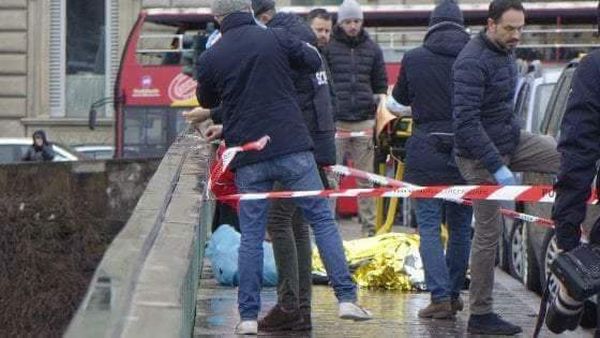 A 65-year-old Italian man who left his house on Monday morning, to commit suicide ended up shooting a Senegalese migrant dead on a bridge in central Florence.

According to report, the man identified as Roberto Pirrone, had left home with a legally-owned gun after leaving a suicide note addressed to his daughter. But the suspect, whose statements about the event remain confused, could not bring himself to take his own life, or had a change of heart and instead shot at a 54-year-old Senegalese migrant, Idy Diene, firing on him six times.

According to the press, he wanted to end his days in prison to no longer be a burden on his family.
Reports say he chose not to open fire on the first people he crossed, who were walking with their children, but settled on the migrant.

A medical team managed to revive the victim, who was residing legally in the country, but he succumbed to his injuries 40 minutes later, leaving behind his partner and daughter.

After being alerted by witnesses, security forces from the Folgore paratroopers’ regiment, which was on duty in the ‘Safe Streets’operation, spotted and detained the shooter.

Florence Chief prosecutor, Giuseppe Creazzo on Monday, said racism was not a factor in the murder.

“Racist motives should be ruled out, ” said Creazzo. “The personal profile of the man is not likable to this. No links to political groups have emerged, never mind righting or racist ones”

In the early afternoon, some 20 Senegalese mourners staged a sit-in on the bridge to denounce the murder.

“We’ll stay here as long as it takes. This is the third Senegalese man killed in Florence, that’s enough,” one of them told the press.