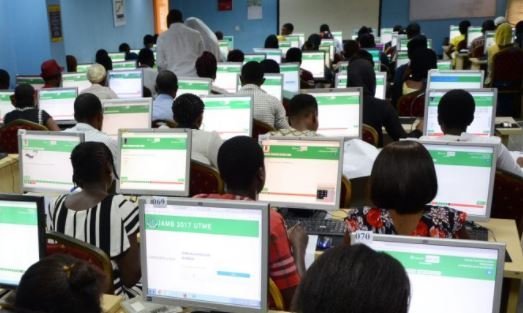 Timothy Samuel, a school teacher has been arrested by officers of Nigeria Security and Civil Defence Corps in the Gwagwalada area of Abuja for impersonating his sibling, Samson Samuel, in the ongoing 2018 Unified Tertiary Matriculation Examination.

The school teacher was reportedly caught at the Air Mass Computer Institute in the Madalla area of Niger State by a team comprising operatives of the NSCDC and the Joint Admissions and Matriculation Board. It was gathered that Timothy’s mother had persuaded him to sit the examination on behalf of his brother, who had taken ill.
The JAMB Supervisor at the Madalla Computer-Based Test Centre, Sakina Tafida, said the suspect evaded screening and sneaked into the examination hall.
“We, however, found that the number of exam slips that we collected after the fingerprint screening was less than the number of candidates in the hall. He actually skipped the fingerprint device and the photograph on the slip he gave us later was that of his brother, Samson,” Tafida said.
The JAMB Registrar, Professor Is-haq Oloyede, who confirmed the arrest, said the mother of the two children was to blame. He said, “Parents need to disassociate themselves from this shameful attitude. It is against any type of parenting that you want to inculcate the spirit of deceit into your children.”