Home News OMG: This Young Boy’s Intestines Were Pulled Out Of His Body To...

The above pictured 13-year-old boy had to have his intestines pulled out of his body through his belly button to remove magnetic balls he swallowed while using them as a fake ‘tongue piercing’.

Harry Clarke, 13, from south London, was in the operating theatre for almost four hours at King’s College Hospital after swallowing the balls.

He and his friend Laila Palmer were messing around with the magnets at school after Laila’s mother bought them on eBay.

The pair ended up in hospital beds next to each other at the same hospital and both ended up needing surgery.

Laila’s surgery was first and they discovered the magnets in her small intestine. They made three incisions and eventually got them out.

But in Harry the magnets were stuck between his large and small intestine and the surgery was almost four hours long.

They could only get the magnets out by pulling his intestine through his belly button and searching for the small metal piece.

Both kids have been given a week off school. Harry was released from hospital on the Monday and is still in pain, while Laila, released on Sunday, has fared better.

Harry’s mother Samantha Brinklow, 34, of Streatham, said: ‘Leila was at school and she had swallowed them and had thought nothing of it.

‘But she then saw Harry in the corridor and he’d swallowed them too and was panicking as he’d spoken to me and I knew it could be dangerous.’

Both parents dialled 111 and were told to report straight to A&E at Kings in nearby Denmark Hill.

‘They thought they might just come out, but although I’d given Harry a laxative, that didn’t happen,’ Ms Brinklow said.

‘X-rays showed where they were and then they started talking about surgery. It was scary.’

Schools and hospitals have warned about the magnetic ball bearing craze after several other children were brought into A&E departments across the country having swallowed them.

At least two were left with significant internal damage, as if swallowed separately, the magnets pull through the delicate intestinal lining to get back together.

Children are using them on their tongues, their ears and lips to make it look like they have piercings.

Laila’s mother Safiya Palmer, 32, said she had bought the magnets on ebay for less than £10 as she thought they were an educational toy.

There was a warning about not swallowing them, but she says she never thought they would end up near her daughter’s mouth.

Now both parents want to see the magnetic balls – which are widely available online – banned.

Mrs Palmer, also of Streatham, said: ‘People will have these around the house and not realise how dangerous they are.

‘The magnets are so strong that they will literally shred your intestines.

‘Rather than selling a product with a warning on, should they be selling it at all?’

Teaching assistant Ms Brinklow added: ‘If I was teaching kids about magnets in science classes at school and saw these in a shop, I’d buy them.

READ ALSO
Top Mistakes To Avoid During A Visa Interview

‘But after what’s happened to Harry and Laila it seems absolutely mad that they are on sale at all.’

The problem is clearly affecting children across the country.

See another photo below:- 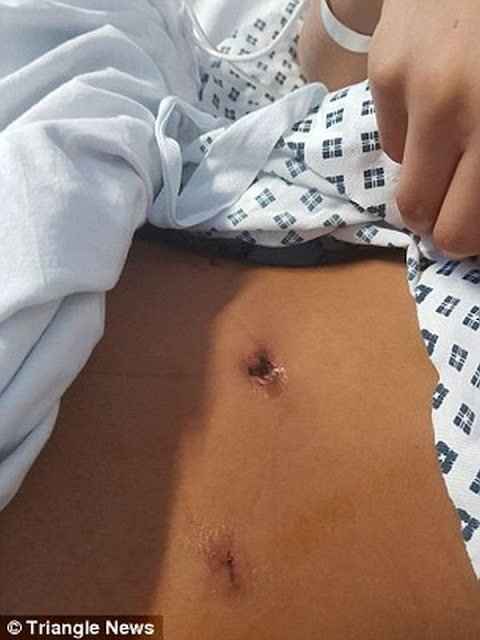