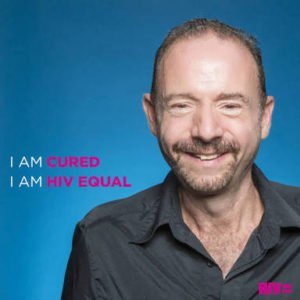 Timothy Ray Brown (born 1966) is an American considered to be the first person cured of HIV/AIDS.
Brown was diagnosed with HIV in 1995 while studying in Berlin, Germany, giving him the nickname The Berlin Patient.
In 2007, Brown, who was HIV positive, underwent a procedure known as hematopoietic stem cell transplantation to treat leukemia (performed by a team of doctors in Berlin, Germany, including Gero Hütter). From 60 matching donors, they selected a [CCR5]-Δ32 homozygous individual with two genetic copies of a rare variant of a cell surface receptor. This genetic trait confers resistance to HIV infection by blocking attachment of HIV to the cell. Roughly 10% of people of European ancestry have this inherited mutation, but it is rarer in other populations.
The transplant was repeated a year later after a leukemia relapse. Over the three years after the initial transplant, and despite discontinuing antiretroviral therapy, researchers could not detect HIV in Brown’s blood or in various biopsies.
Levels of HIV-specific antibodies in Timothy Brown’s blood also declined, suggesting that functional HIV may have been eliminated from his body. However, scientists studying his case warn that this remission of HIV infection is unusual.

Brown, the “Berlin patient”, suffered from graft-versus-host disease and leukoencephalopathy – both transplant complications that are potentially fatal. This means that the procedure should not be performed on others with HIV, even if sufficient numbers of suitable donors could be found.