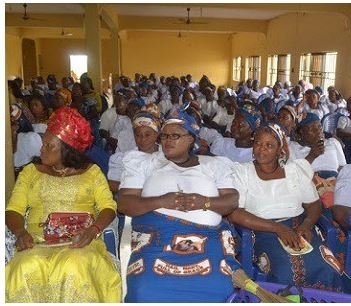 Mrs. Esther Nweke, an Igbo woman has been sanctioned at a cultural gathering of Igbo people in Lagos for wearing a pair of trousers to a meeting.
A report by source reveals that Esther didn’t expect what she got at the meeting after she was asked to say some prayers while the meeting was rounding off.

The traditional rulers, chiefs and other leaders present at the meeting upon noticing that the woman was in a pair of trousers asked her to stop the prayers and pronounced that she had committed an abomination.
However, Mrs. Nweke insisted that since she had been nominated to say the closing prayer she would go on. This made the leaders to walk out of the venue of the meeting insisting that they will not partake in such prayer which will attract curses on them.
It was gathered that her appearance may attract further sanctions to serve as deterrent to other women who might try such in the future.
Eze Lawrence Eze had summoned the meeting of the Igbo leaders to proffer solutions to the lingering crises in Alimosho LGA CDAs over the years.
It was gathered that the Igbo people in the LG were divided among themselves with different groups having their faction leaders, which made it difficult for the monarch to identify which group to associate with.

At the meeting the leaders agreed to unite, pursue a common goal and resolved to set up a committee to look into the crisis. However, another round of chaos started at the end of the meeting when Mrs. Nweke was nominated to say the closing prayer.
It was gathered that in any Igbo social gathering, married women are not allowed to wear trousers to such gatherings.
Some weeks back, a Facebook user took to the platform to share an incident that happened while she was commuting from Onitsha – according to her, a lady who donned a trouser had decided to preach the gospel to her fellow travelers when a man stopped her saying women shouldn’t preach on trousers.
She wrote,
Is it true that Ladies should not preach while putting on trouser? I was on my way back from onitsha when a lady sitting infront of me wanted to preach inside the bus, a guy sitting near me interrupted her and told her never to preach while putting on trouser, that next time she should dress like a child of God before trying to preach to others.
Argument ensuea, a lot supported the guy while some said it doesn’t matter what she is wearing so far her heart is pure, but the lady couldn’t preach again because the embarrasment was much.
What’s your take on this? does what one wears matters when preaching? should ladies avoid wearing trouser if they want to preach?