NEW YORK (AP) — Venus Williams gave a scouting report on her warmup partner that sounded the same as always.

Serena Williams is back, and her game hasn’t left. 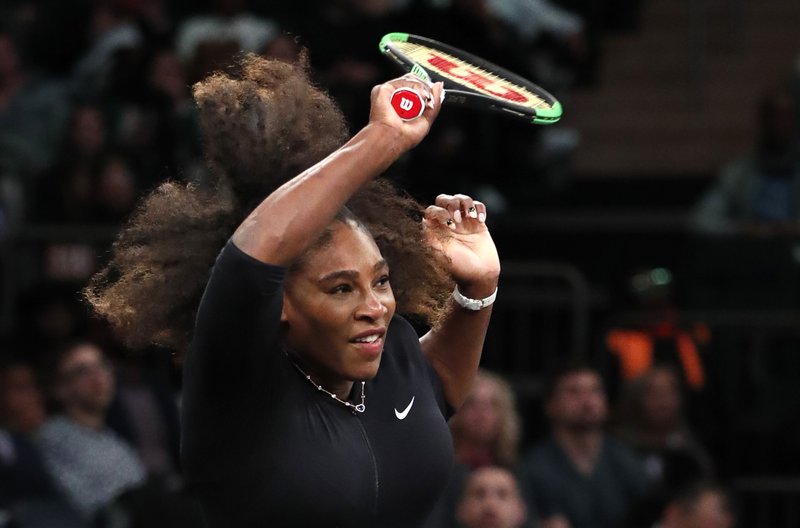 The Williams sisters were the headliners Monday night in the Tie Break Tens tournament in Madison Square Garden, an eight-woman event in which all matches were 10-point tiebreakers, instead of the usual games and sets.

Serena won her first match but lost in the semifinals. Elina Svitolina of Ukraine dominated the event, winning 17 straight points during victories over Venus and CoCo Vandeweghe before defeating China’s Zhang Shuai 10-3 to win $250,000.

READ ALSO
How Peruzzi's After Sex Video With 18-year-old UNILAG Slay Queen Was Leaked
Serena was playing singles for the first time this year as she prepares to return to the WTA Tour for the first time since giving birth to her daughter, Alexis Olympia Ohanian Jr., on Sept. 1. The 23-time Grand Slam singles champion would later tell Vogue Magazine in an interview that she developed several small blood clots in her lungs after giving birth.

She had played just once this year, losing a Fed Cup doubles match with Venus last month, and hasn’t played a singles match on tour since winning the 2017 Australian Open, where she beat Venus in the final.

Serena won her first match against Marion Bartoli of France, the former Wimbledon champion who is ending a 4 1/2-year retirement, but lost 13-11 to Zhang in the semifinals. She said she was having fun playing again and was excited for the future.

“I think everyone should have high expectations,” Williams said in an on-court interview after her loss. “You should always believe in yourself even if no one else does.”

Her coach certainly does. With Serena returning this week in Indian Wells, California, Patrick Mouratoglou told WTATennis.com he had high expectations for the three remaining Grand Slam tournaments this season. He said he sees the same determination in practice, but wouldn’t know if being a mother had changed her until he saw her competing.

Venus already knows what to expect.

“I mean, the matches are definitely a good way to know where you are, but obviously she knows how to play,” the 37-year-old Venus said. “She’s going to bring that instinct on the court with her, so I don’t think she’s too worried about that.”