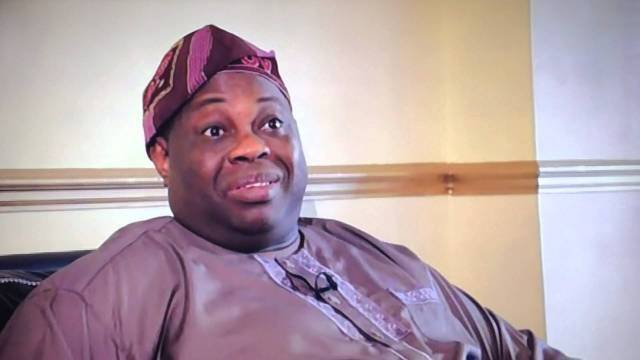 Publisher of Ovation magazine and public analyst, Dele Momodu has written about the poor state of most airports in Nigeria. According to him, the country has some of the worst developed airports in Africa.
In his article this weekend titled ‘Before The Rest Of Africa Leaves Us Behind’, Dele Momodu writes about his experience during his recent tour of African countries and how he thinks Nigeria is still far behind.
Fellow Nigerians, I’ve been on tour of Africa, as I mentioned recently on this page, and I’ve covered parts of East and West Africa in the past two weeks.
My conclusion and verdict is that things are happening out there while we are free to delude ourselves that we are the giant of Africa.

The things that make us the giant, exceptionally brilliant citizens, humongous population, energetic manpower, fertile land, beautiful weather, we’ve refused to turn into useful assets but rather into liabilities.
I won’t bore you with too much details of the countries visited but will summarise the things we lack and why we are lagging behind and what we need to do speedily to catch up and ultimately overtake the comity of other nations in their march towards genuine progress, development and advancement.
Nigeria parades some of the worst airports in Africa today. Let no one preach to me that it is because the PDP government stole the money meant for the airports. As a matter of fact the Goodluck Jonathan administration made some remarkable effort compared to our own government of change which in nearly three years has revamped only the runway in Abuja. The most disgraceful airport for a seat of government is the Nnamdi Azikiwe International Airport.
I plead with President Muhammadu Buhari or Vice President Yemi Osinbajo to pay unscheduled visits to that disgraceful airport, I’m sure they will shed tears.

READ ALSO
‘The Lion King’ spends two weeks at the Top Spot on Box Office
Next they should please come to Lagos and ignore the Presidential wing and head to the odoriferous sections ordinary mortals like us use regularly and I’m certain they would be warmly received by some putrid spirits.
READ ALSO
Lilian Esoro Bags An Endorsement Deal With Perfume Empire
It is unexplainable how we can continue to disgrace our dear beloved country without a care in the world. There is no other country you have to give your passport first to secret service agents before you queue up again in front of Immigration officials. There is no airport you get accosted by countless uniformed officers at the entrance of departure and at the exit of arrival.
There is no airport where on arrival, all passengers must exit the airport in one direction only and no taxis within range. This is the situation in Lagos. Let me not talk about the rickety elevators and escalators. We are indeed a most difficult race.
The only reasonable and professional airport is the MM2 in Lagos which is privately owned.
I saw better airports in much smaller country. By the time Ghana opens its Terminal 3 very soon to the public, it would be about the best in West Africa. This was a project that was substantially worked on under the Government of President John Dramani Mahama.
The cargo section which is already in operation is wearing the powerful signature of Swissport as its operators. The Immigration section at the Kotoka International Airport is one of the most advanced in Africa complete with cameras for iris and fingerprinting machines for data capturing. We have neither despite our being prone to terrorism.
READ ALSO
Bankulli Celebrates Davido's New Born Baby in Grand Style (Video)
I could not believe my eyes when I landed in Dakar, Senegal, last week at its brand new airport opened by the obviously visionary President Macky Sall, only last December. It is such a beauty to behold.
Even the Jomo Kenyatta International Airport in Nairobi, Kenya, which was destroyed by a towering inferno years back, has since been restored to its old glory and expanded to cater for millions of passengers. The international Airport in Kigali is very small but running efficiently.
My favourite part is the Immigration area where you pay $30 for visa on arrival without stress and thereafter pass your bags through x-ray machines instead of a multitude of officers rummaging through your luggage. I hope Rwanda would drastically reduce the time passengers have to spend clearing security on departure and also improve on the quality of food and services in the Business Class lounge. Rwanda has become a country of choice for me as an example of a serious country that wants to engage the world in serious business.
No nation can be considered civilised without putting certain things in place. One of such is infrastructure. Electricity is on top of the priority. Many African countries have improved their power generation, transmission and distribution processes. Too much politicisation and bureaucracy has turned Nigeria into a jinxed nation despite the billions of dollars spent and obviously wasted by successive governments. As a matter of fact, one of the most ambitious power projects in our country has already gone to international arbitration because of the excessive power show in Abuja.
Every effort to upgrade our power sector has met with foolish resistance.

Whereas, Ghana again, under the former President John Dramani Mahama, was able to fix the erratic power outages, nicknamed Dumso Dumso, within two years. And the Ghana Electricity Company was very creative by rationing and rotating power supplies to different zones interchangeably.
I can list a myriad of problems facing us but the biggest is the failure of leadership. Our leaders have blatantly refused to do the needful. The biggest of all the afflictions is ethnicity which turns otherwise intelligent human beings into morons.
Most of our problems would evaporate and disappear the day we are ready to exorcise the demon of ethnicity. I saw the evidence of this thesis in Rwanda where everyone must regard each other as Rwandese rather as Tutsis or Hutus. It has become a crime to so describe any citizen of Rwanda.

On the contrary, Nigerian leaders prefer to be identified as local champions instead of being global personalities. Our clannishness has stultified us beyond reason. I used to be an incurable optimist but recent events have turned me into a paranoid pessimist and unless we urgently rescue our country back from those who are too short-sighted to see the power and strength in the indivisibility of Nigeria, this union may collapse like a pack of cards.
No Nigerian should be treated like a second class citizen in his own country. No ethnic group should feel superior to another. Every Nigerian should treat the other as equal partners.
The next set of Nigerian leaders must be scrutinised and confirmed to be those who are detribalised and religious-tolerant. Nigeria has suffered too much as a result of unbridled parochialism.

As we approach our next general elections, we must prepare to find, select and elect leaders who would detach us from the superstitions that have held us down for far too long than normal at this time and age. We must seek leaders with an acceptable modicum of education. This is not an attempt to deride those who have no formal education. My mum who brought me up had none but she knew the value of education and invested her modest resources in us. Nigeria is too blessed with geniuses to keep settling for leaders without substantial education. Education and exposure to modernity should help reduce our proclivity for backward behaviours.
We must make up our minds about what we want as a people. Do we want to remain forever backward in the name of ethnicity, religion and incredible propensity for material acquisition?
Everyone in the world is trying to break free from a useless past, why can’t we emulate them? Our universe today is knowledge driven, why do we continue to wallow in ignorance?
Until we fix our education which has collapsed, almost irreparably, our country is doomed. I was regaled with stories of how the President of Rwanda, Paul Kagame, is turning his country into a technology hub in Africa.
I have no doubt that even our ruling government in Nigeria has some of the brightest guys who would readily match their counterparts anywhere in the world, but we won’t give them the chance to function optimally. We all remember how Professor Yemi Osinbajo was able to unite Nigerians last year in the middle of the threat of secession from Nnamdi Kanu and his Biafran agitators. If APC had continued along the new path created by the Vice President, things would have been much better for the government and our country by now.
We saw an Acting President who was visiting everywhere and interacting with politicians across divides without discriminating against anyone.
The erudite scholar gave us all a sense of pride and place. But soon after the President returned from his medical sojourn in the United Kingdom, things fell apart. We returned conveniently to our perfidious ways.
Some people even accused the Vice President of working to outshine his boss despite is avowed loyalty to his principal.
Why would anyone change a winning strategy that everyone was already applauding? If the President had maintained that tempo and pace of activities, perhaps the APC would have saved itself from the present calamity.
If the APC fails in next year’s general election, it would only have been a severe punishment for its recalcitrance and myopic nature. Things should always be done according to merits.

READ ALSO
Media personality and vlogger Toke Makinwa Gets Christmas Tattoos
The youths who wish to take over power from the elders should also be fully prepared to work very hard and not sit down, arms akimbo, expecting a miracle from heaven. Their only qualification should never be that they are young and youthful.
They must be accomplished in their own rights and market their credentials energetically. There is no point taking over power only to continue the monumental mess of the past.