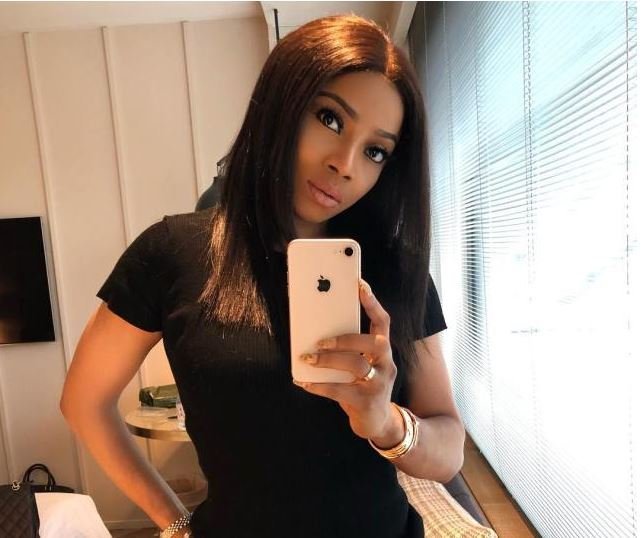 Nigerian British professional boxer has come under fire from social media users recently following a comment he made about his niece.

READ ALSO
How Buhari was banned from the U.S for 15 years-Atiku
Nigerian media personality, Toke Makinwa is not left out in this outing of the boxer – Joshua had in a statement, said he’s being lenient with his son, but strict with his niece because she would someday grow up to be someone’s wife.
Toke, quite saddened by his opinion about teaching a girl on morals, revealed that the problem is not peculiar to him as the society is the one to blame.

In a series of tweets, Toke bared her mind, as she lays out the reason why we all are at fault… the tweets read,
Reading up on the Anthony Joshua statement saddens me but it’s not an AJ problem guys, we are the products of our society and we are all guilty.
Too many seminars, groups, panels for women and who raises the men? From time this has been happening and the earliest we realize it does no one any good the better.
My brother n I started living together recently and I realized how much I enable him without even realizing it. Yet I have high expectations from guys I date. We are all guilty, it’s time we start to have these conversations.
As a female you condone your brothers keeping many girlfriends yet you want to cry wolf when another man does it to you, we let it slide when it is family, we need to do better.
We say “let’s boys be boys” but we can’t handle the reality of who they become! This must stop, we all have a part to play.
We all have a part to play. The last generation and ours might be lost but pls let’s start bringing up young men and not loving or tolerating them.
The next time you want to permit your son, nephew etc to not take part in home chores in the name of “he is a man”, look around you and have a rethink.

No be today it start, especially in Nigerian/African homes, we put so much pressure on the girl child and give our boys the pass on almost everything. Look around you, it’s killing them more than helping them.
Spiritually it’s a woman’s job too. Ahn ahn… I once heard a grown ass man say his mum prays or is a prayer warrior and he expects his wife to continue to cover him in prayers, why can’t he carry the burden spiritually too? #Amnotunderstanding
Let boys cry, stop saying “don’t you know you are a man”, they start to feel it’s a shameful thing to show emotions, stop teasing little boys about how many girlfriends they have in school, stop it. You plant seeds without knowing it
Raise children. Boy/girl to be accountable period. Not one sex gets a pass, less seminars/panels for women, involve the men too
The boxer came under fire after a March 2017 GQ interview surfaced online, where he said that he wants his son to ‘spread his wings’ but that he is ‘stricter’ with his niece.

He’d said,
‘I don’t think I’m that strict with Joseph, I don’t know why,’ he said.’But with my niece I’m strict. I think it is because she is older, but also he’s a boy – he’s going to be a man’s man, he’ll want to spread his wings, be a Jack-the-lad, build his character.’
He added: ‘But I am sure there are things I will be strict about. But with my niece, there is none of that Jack-the-lad nonsense for her!’ ‘My view is you have to be a good woman, respectful, one day you will be someone’s wife, you have to learn family morals… what it is to be a good woman.’