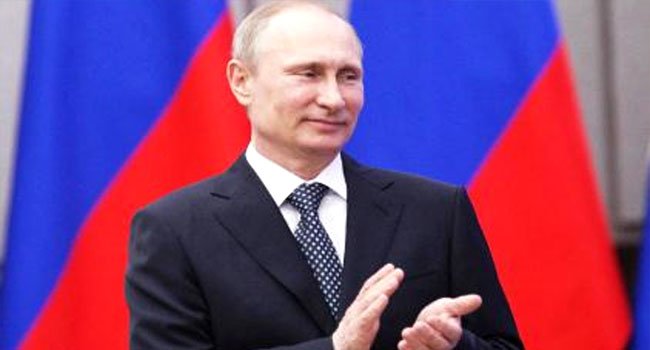 Putin on Sunday won fourth Kremlin term with 73.9 percent of the vote. He is expected to lead Russia for another six years.

READ ALSO
Black Excellence as Chiamanda Adichie, Gabrielle Union, Angela Basset and other top Hollywood stars pictured together
Vladimir Putin was earlier projected to win the Russian presidential election with 73.9 percent of the vote, to secure a fourth Kremlin term, according to an exit poll by state-owned pollster VTsIOM.
The exit poll from 1,200 polling stations around Russia gave second place to Communist candidate Pavel Grudinin with 11.2 percent. VTsIOM said in a statement that over 37 percent of those polled refused to say who they voted for.

Russians voted Sunday in a presidential election which hands Vladimir Putin a record fourth term, with officials reporting strong turnout but the opposition crying foul.
Putin contested against seven other candidates, but his most vocal critic Alexei Navalny was barred for legal reasons and the outcome is in little doubt.
About 107 million Russians are eligible to cast ballots and turnout was nearly 60 percent an hour before polls closed in Moscow at 1700 GMT, according to figures displayed in the central electoral commission information centre.

Authorities have pulled out all the stops to boost participation, with selfie competitions, cheap or free food and entertainers organising games for children at polling stations.
Employees of state and private companies have reported coming under pressure to vote, while students have been threatened with problems in their exams or even expulsion if they do not take part, according to the opposition-leaning Novaya Gazeta newspaper.

READ ALSO
Skales And His Girlfriend Neza Celebrate One Year Anniversary of Dating , Mr Eazi Reacts
Unprecedented violations
Navalny, who is overseeing a campaign for a vote boycott and sent over 33,000 observers across the country with manual counters to see how official turnout figures differ from those of monitors, said there had been “unprecedented violations”.
His supporters and the non-governmental election monitor Golos reported ballot stuffing, repeat voting and Putin supporters being bussed into polling stations en masse.
One election commission worker in the Republic of Dagestan, which traditionally registers extremely high official turnout figures, told AFP around 50 men entered the station where he was working and physically assaulted an independent observer before stuffing a ballot box.
But the electoral commission dismissed most concerns, saying monitors sometimes misinterpret what they see.
Since first being elected president in 2000, Putin has stamped his total authority on the world’s biggest country, muzzling opposition, putting television under state control and reasserting Moscow’s standing abroad.
The 65-year-old former KGB officer has sought to use the campaign to emphasise Russia’s role as a major world power, boasting of its “invincible” new nuclear weapons in a pre-election speech.
Casting his ballot in Moscow, Putin said he would be pleased with any result giving him the right to continue as president.
“I am sure the programme I am offering is the right one,” said the man who is already Russia’s longest-serving leader since Stalin.
Most people who spoke to AFP said they voted for Putin, praising him for lifting the country out of the post-Soviet quagmire.
“Of course I’m for Putin, he’s a leader,” said Olga Matyunina, a 65-year-old retired economist. “After he brought Crimea back, he became a hero to me.”
Sunday marks four years since Putin signed a treaty declaring Crimea to be part of Russia in a move that triggered a pro-Kremlin insurgency in east Ukraine, a conflict that has claimed over 10,000 lives.

Why vote?
Ahead of the vote, a new crisis broke out with the West as Britain implicated Putin in the poisoning of former double agent Sergei Skripal with a Soviet-designed nerve agent.
In response, London expelled 23 Russian diplomats, prompting a tit-for-tat move by Moscow. Also this week, Washington hit Russia with sanctions for trying to influence the 2016 US election.
Putin’s previous Kremlin term was marked by a crackdown on the opposition after huge protests, the Ukraine conflict, military intervention in Syria and the introduction of Western sanctions that contributed to a fall in living standards.
But he seems certain to extend his rule to 2024 despite a lacklustre campaign and a litany of domestic problems such as widespread poverty and poor healthcare.
State-run pollsters predict Putin will take about 70 percent of the vote, with the independent Levada Centre — branded a “foreign agent” — barred from releasing any polls.
“I will not go to vote. What for?” Boris Limarev, a 39-year-old manager, said as he walked his dog near a polling station in Saint Petersburg.
“It’s clear to everyone who will be elected.” “And the rest of the candidates are clowns,” interjected his wife Anna, 35.
“Another six years of slavery,” said a piece of paper made up to look like a ballot which was spotted on a Moscow street — in an apparent reference to Putin’s next term.
Putin’s Kremlin-approved challengers include millionaire communist Pavel Grudinin and former reality TV host Ksenia Sobchak, but none was expected to win more than seven percent.
Election officials flew to far-flung regions to collect votes from indigenous herders, while cosmonaut Anton Shkaplerov — the only Russian currently aboard the International Space Station — cast his ballot by proxy.
With the vast country stretching across 11 time zones, polls close in Kaliningrad, the exclave on the EU border, at 1800 GMT, with exit polls due shortly afterwards and official results issued through the night.
– AFP