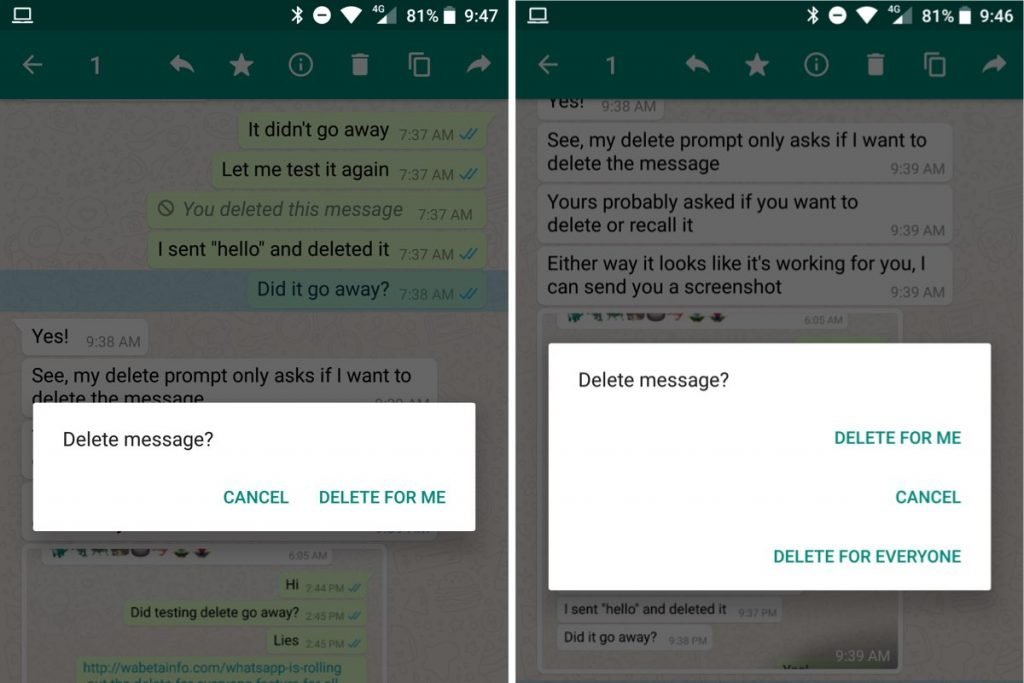 WhatsApp has updated its ‘Delete for Everyone’ feature to let users delete sent messages within 4096 seconds or 68 minutes and 16 seconds, compared to 420 seconds or seven minutes deadline earlier. According to WABetaInfo, the feature is currently live for WhatsApp Android beta version 2.18.69, with stable release for Android and iOS to follow soon. This means that only WhatsApp Android beta testers can take advantage of the extended deadline for ‘Delete for Everyone’ feature as of now.
To recall, WhatsApp officially rolled out ‘Delete for everyone’ feature globally for Android, iOS, and Windows users in November last year. At the time of the launch, it allowed people delete sent messages, including media within seven minutes of sending them. Both recipient and sender get a notification when messages get successfully deleted.

Though the feature quite useful, some users argued the deadline for deleting a message was too short. Looks like WhatsApp will take care of the issue with its latest update for Android and iOS. With the update, users will be able to delete sent messages even after an hour.
Meanwhile, WhatsApp is working on a new features that will allow users to mark messages that have been forwarded from another or same chat as ‘Forwarded message’. The feature is reportedly available for Android beta version 2.18.67. A new Stickers feature is also under development for Android and will be available soon, reports the website. The Facebook-owned app has added support to forward stickers to other chats, a feature that is currently disabled.

WhatsApp is also testing a new ‘Group Description’ feature on the Android beta and Windows version of its app. It lets users add Group description by simply tapping on the Group name. The option for adding description appears below the group picture. Non-Group admins can also add a group description.

WhatsApp may soon get an ‘ undo ’ button for deleted dispatches