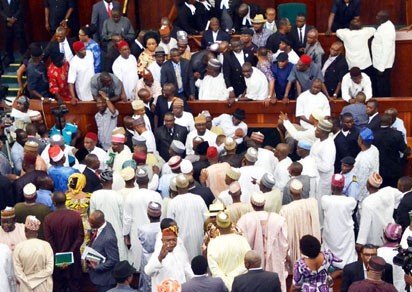 A Minister in Zambia has been suspended for one month for slapping a lawmaker within their National Assembly ground. Verbal abuse is common among members of parliament in Zambia but physical assault is rare.

Speaker of the Zambian National Assembly, Patrick Matibini, said Lusaka Province Minister, Bowman Lusambo, was suspended for slapping outspoken lawmaker Chishimba Kambwili in October 2017.
Kambwili has repeatedly accused government officials of corruption since his dismissal as information and broadcasting minister in November 2016 but the state denies the allegations. Kambwili complained after the incident that Lusambo had slapped him twice after accusing Kambwili of making false accusations against the government.

READ ALSO
‘Hope nothing happened to Trader Money’ – Nigerians react to VP Osinbajo’’s helicopter crash
Matibini said Lusambo was banned from entering parliament grounds and using its facilities during the period of suspension and would not be entitled to any allowances.

Peter Obi meets with PDP Governors and others in Rivers state