While some celebrities are there to serve as role models, others are just working tirelessly for your downfall

The drama started when Tunde Ednut shamed one of the top five Big Brother Naija contestant,Nina, as he came on to her strongly, asking her to stop using Android phone as it reflected a particular photo of her badly.

I will give you the whole world and more – Tonto Dikeh

Tonto Dikeh who felt that the rude comment was undeserved and unnecessary commented asking him to get her a better phone sine he is the one that noticed it instead of shaming the young lady who just began life as a celebrity and can’t afford one.

Mama King succeeded in saving the day as Ednut suddenly went mute, giving Nina who has not reacted to the drama, some space to breathe 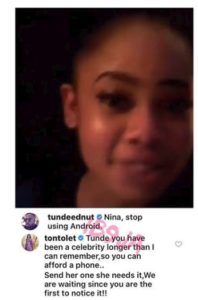 Meanwhile, Nina is currently on media tours, as she begins to plan what’s next with her life as she narrows her way up the ladder of success especially with the platform that the reality show provided her

“You are not God”-Amaechi Tells Buhari.

Violette - July 2, 2019 0
A First Republic Aviation Minister, Mbazulike Amaechi, has reacted angrily to the statement credited to President Muhammadu Buhari that Nigerian soldiers were soft on Igbo during...

“I am married,” – Singer Simi says

Johnson Olumide - December 17, 2018 0
Simi took to her Instagram stories and revealed she is a married woman while replying a troll who took it upon himself to give...

Violette - March 18, 2018 0
Andrea Dovizioso defeated Marc Marquez in a dramatic duel during the closing stages of the Qatar GP, the Italian beating home the Honda by...

Johnson Olumide - July 11, 2019 0
The King of Juju Music in Nigeria and all over Africa turned 70-year old yesterday and it was a day to remember has birthday wishes from...

Violette - July 2, 2019 0
Although police are still investigating the cause of a triple murder suicide in the family house of a Nigerian pharmacist, Olasunkanmi Esho and his wife Bourk...