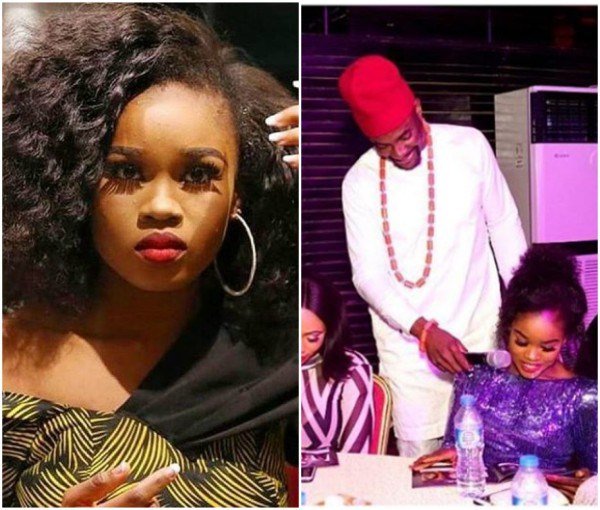 The photo which was leaked afterEbuka disclosed that contrary to Cee-C’s claims they’ve never met, placed the reality show host at a position of liar.

Reacting to the photo, Cee-C said that the fact that someone met you at an event doesn’t mean the person remembers you, and since Ebuka who is huge in the industry probably meets over 100,000 people a week, he therefore has every right to say he has not met her.
Here’s what she wrote;

“I have a huge appetite for sex” – Nigerian plus size vlogger, African Duchess Supreme

“I have alot to address and answer but I will address this particular issue.
An interview of someone I respect, admire and see as my mentor was drawn to my attention. Like I said in the house I met @ebuka at an event he hosted, Yo!!! the fact that you meet somebody doesn’t mean that the person has to remember you. @ebuka is HUuuuGE in this industry and probably meets over 100,000 people a week, so therefore he has every right to say he has not meet ME.

What I said in the house was from the view of someone who does not understand the industry. Guys I have met and had conservations with alot of people this week, that would as well say they have met me this week too and I can’t even remember.
To my fans, I do appreciate you all for always having my back, mehn!! where did you guys get that picture from???
I advise we take it easy with the bashing, negativity, etc
Love You All,

Stephanie Coker On Cee-C &amp; Tobi: “Lord Save Me From This Kind Of Stupidity” 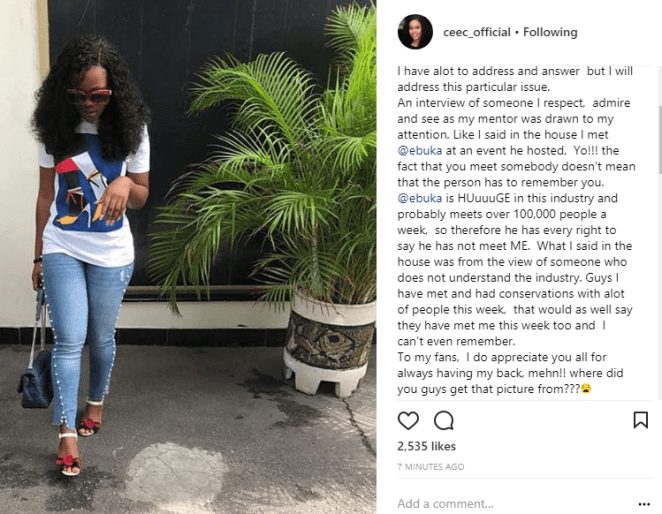 Recall that we reported that Ebuka in his interview with Toolz, denied meeting the ex-housemate before. He said Cee-C said so many things she could not even defend

According to him, “She said something in the house that got mixed interpreted. She said she drove to my house and we had a conversation that made me put her into the reality show.

“Apparently she came to marketed something to me, in some event, I mean, I attend so many event in Lagos. I’m not supposed to remember everybody.

“Apparently, this happened at Terraculture, nothing about this came to my mind until I heard what she said during the show.

“To the best of my knowledge, the first time I met Cee-c was when I spoke to her on stage during the show.

“The reason I didn’t debunk it was because I wanted it to die naturally. It was a very stupid rumour and I didn’t want to give life.

“I think she has crush on me. But I don’t know what else she has on her head. I’ve never spoken to her except while in the house when I was doing my job.”

#BBNaija: I would like to have a thr*esome with Nengi and Vee — Pere (Video)

Johnson Olumide - February 17, 2020 1
The Nomination List of the SAG AWARDS has been announced yesterday morning at the Pacific Design Center in West Hollywood. And as usual there were...

Toyin Lawal Bares Her Cleavages in a Bedroom With A Man ,Fans React

BBNAIJA: I Am Now With The Opera News Family- Avala As She Signs New...

Violette - November 10, 2019 0
Big Brother Naija Former housemate, Saidat Avala Balogun popularly known as Avala has has shown the fans and followers how fashionable she can be...

Jambites, Get In Here ➨ See The Possible Post-UTME Screening Cut-off Marks For All...

Eddie Andy - April 16, 2018 0
Last year, all institutions, following the directive from JAMB fixed their Post-UTME Screening Cut-off marks. These cut-off marks were decided by the Senate and management...

Johnson Olumide - November 28, 2018 0
24-year-old Zizo Apleni decided to speak about her rape ordeal at the start of the 16 Days of Activism Against Gender-Based Violence in South Africa. Zizo is...