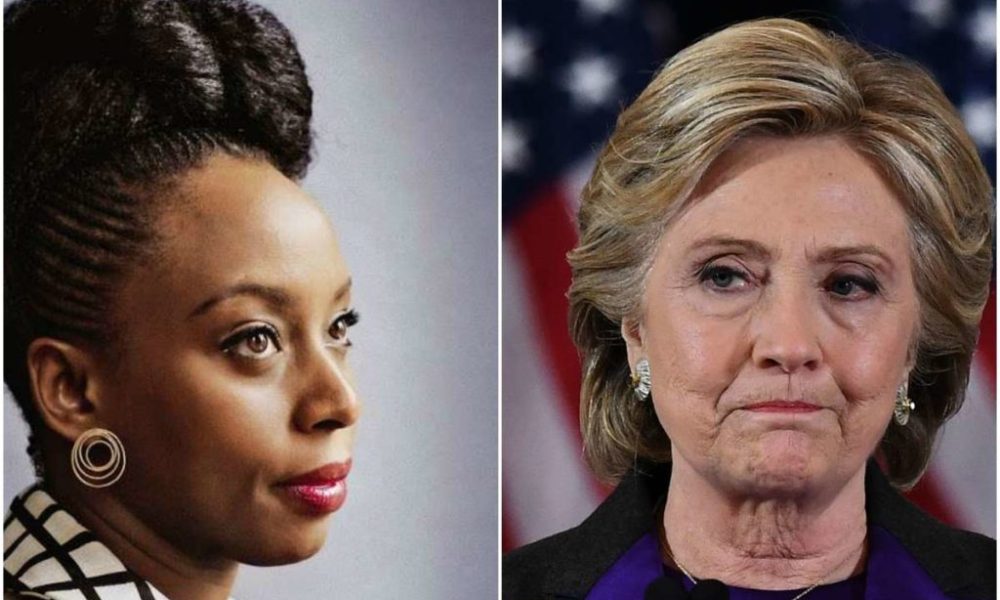 Chimamanda Adichie has confronted former US First Lady and US presidential aspirant, Hillary Clinton concerning her Twitter bio. This she did While conducting an interview at a PEN World Voices Festival lecture at the Cooper Union in Manhattan on Sunday night.

She asked the former first lady why – with all her career accomplishments – she chose to be primarily identified in her Twitter bio as a “Wife.”

Bill Clinton’s Twitter bio leads with, “Founder, Clinton Foundation and 42nd President of the United States.” There was no mention of his marital status, neither did he add that he’s a father”.

”When you put it like that, I’m going to change it.

Clinton’s response prompted roars from the crowd. But she had a good explanation for why she started by describing herself as a “Wife” in her Twitter bio. She said that women should be able to celebrate both their accomplishments and their relationships. She told a story about hearing the former US First Lady, late Barbara Bush speak at Wellesley in the early 1990s”.

And though Barbara Bush got a standing ovation after that speech, Hillary Clinton told Chimamanda Adichie and the PEN crowd she’s not sure Bush was right”.

”It shouldn’t be either/or. It should be that if you are someone who is defining yourself by what you do and what you accomplish, and that is satisfying, then more power to you. That is how you should be thinking about your life, and living it. If you are someone who primarily defines your life in relationship to others, then more power to you, and live that life the way Barbara Bush lived that life, and how proud she was to do it.

But I think most of us as women in today’s world end up in the middle. Wanting to have relationships, wanting to invest in them, nurture them, but also pursuing our own interests”. Johnson Olumide - December 24, 2018 0
Singer Timi Dakolo sent season greetings to fans as he shares his family loved up photo. He shares the photo on his social media space,...

Johnson Olumide - July 16, 2018 0
Right after the close of the 2018 Soccer World Cup which France emerged winners, one of Wizkid’s song ‘Soco’ to be precise was played...

Work from home in the Philippines, apply now!

Violette - July 7, 2019 2
I’m looking to add someone to my team in a creative assistant type role to assist me with the day to day running of...

BBNAIJA: Esther Blesses Her Fans With A Beautiful Photo As She Steps Out...

Violette - November 26, 2019 0
Big brother star and one of the very beautiful ones Esther Agunbiade has uploaded this beautiful photo on her Instagram timeline as she steps...

Joel Adesina - June 11, 2020 0
Pastor Enoch Adeboye, the General Overseer of the Redeemed Christian Church of God (RCCG), has said he will kill anyone touching his wife, Pastor (Mrs)...