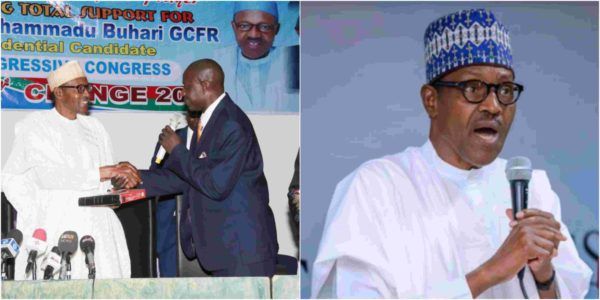 A Christian group, in their reaction to the current state of the country under the leadership of President Buhari, is set to hold a 30 day fasting and prayer session to prevent the president from winning the 2019 elections.

The United Christian Leaders Eagle Eyes Forum (UCLEEF), group had presented a copy of the Holy Bible to President Buhari during the count down to the 2015 Presidential election.

Addressing a news conference in Abuja on Thursday, Chairman of the Forum. Pastor Aminchi Habu said there was every indications that if President Buhari is re-elected in 2019, the country will continue to slide backward, asking Nigerians to expect more failures from the president.

According to him, what the country needs to end the high level of social decadence and lack of development in the country was to elect a leader with a vision and the mindset to make the nation great

“The president knows that he has nothing you offer this country. So, he should just maintain his integrity by keeping to his word of doing only one term.

“He failed already and will surely fail again because nothing will change. It will still be the same group of people. Just because engine oil makes a car run smoothly doesn’t mean it can revive an engine that knocks.

“The president is not a leader anymore but has turned to a ruler. A leader put his people first while a ruler only thinks about himself. Right now Mr President is not thinking about the masses but himself only. He just wants to remain in power and not you serve thus country because he cannot.

“We cannot continue like this and that is why we are urging Nigerians to vote massively against him and retire him forcefully. He has nothing to offer again. Mr President is known for blaming others for his failures. He blames the PDP girl the economic problems in the country and now he is blaming late Gaddafi for the insecurity problems in the country,” he quipped.

Pastor Aminchi noted that 30-day prayers and fasting had commenced by both Christian and Muslim faithfuls for a true leader to emerge out of the many aspirants, stressing:

“I indulge each and every citizen of this country to awake and save our dear nation. We all have the power, the right and the choice to make the right and wise decision so that Nigeria will be great again.

“That is why we as a Christian forum with some of our Muslim brothers with like mindset have entered into prayers and fasting that before we reach the middle of the year, that is June, a true leader will emerge out of the many aspirants”.

Johnson Olumide - December 20, 2019 0
‘Nwa Baby’ crooner, Davido took to his Instagram page to celebrate Nigerian songstress, Tiwa Savage as she sold out her own concert, ‘The Savage Tour’ at Indigo at the O2...

Serena Williams shares Photo of her in a plane Heading to Paris for...

Johnson Olumide - October 14, 2021 0
Nigerian actress and Upcoming DJ, Dorcas Shola-Fapson took to her social media page to reveal that the internet is where relationships go to sink. Shola...

Johnson Olumide - February 18, 2020 0
The 21-year-old Model and Reality TV Star is the cover girl for Vogue Magazine September Issue and the excited Supermodel gushed about it on her instagram saying: (adsbygoogle...

Nicki Minaj Breakup with Meek Mill Over His Constant Cheating

Johnson Olumide - May 12, 2020 0
Nicki Minaj Breakup with Meek Mill Over His Constant Cheating The rumors are yet to be officially confirmed by both parties , but more revelations...