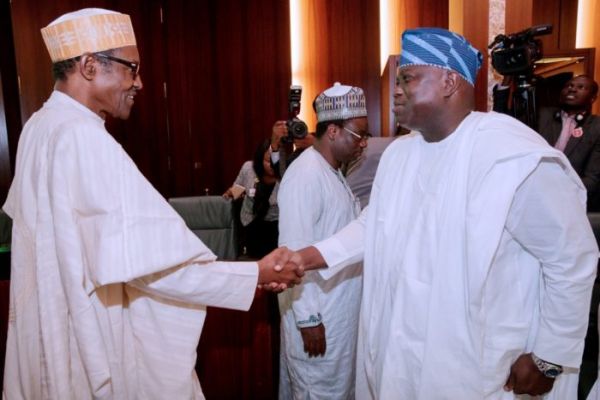 President Muhammadu Buhari and Akinwunmi Ambode have disagreed on what the president came to do at Eko Atlantic City.

The Presidency and the Governor of Lagos State, Akinwunmi Ambode, have disagreed over what President Muhammadu Buhari went to do at the Eko Atlantic City during his two-day working visit to the state.

Governor Ambode said in his official Twitter handle that the President went there to inaugurate the project.

The tweet read, “We took a tour of the Eko Atlantic City with Mr. President as he officially commissioned (sic) the project. Eko Atlantic is a good example of what Public and Private Partnership can do to the Nigerian economy.”

Amaechi didn’t pay me N50m to lie against Wike – Adeyanju

However, Twitter went wild with many users pointing out that it was former President Goodluck Jonathan who in company with the then Governor, Babatunde Fashola, and former United States President, Bill Clinton, that inaugurated the project in 2013.

The pictures of Jonathan inaugurating the project were also shared multiple times on the micro-blogging site.

In his response on Twitter, however, Buhari disagreed with Ambode, insisting that he only went to inspect the project.

Using the handle, @NGRPresident, he said:-

“The President did not commission (sic) or launch Eko Atlantic City. His visit was a tour as part of a two-day offical visit to Lagos State and the plaque he unveiled was to commemorate his visit to the site.”

Former Edo state Governor, Adams Oshiomole’s wife, Lara, seen in public for the first time in a while (photos)

Violette - June 28, 2019 0
British PM will reiterate determination to bring suspects to justice when she meets Russian president Theresa May will use a face-to-face meeting with Vladimir Putin...

We are beautiful, beauty lies inside, not always physical – Miss Ghana 2019 winners

Violette - July 22, 2019 0
Emerged winners of Miss Ghana 2019 excellence pageant have hit out at pundits and internet-based life trolls who marked them ugly in an interview. It began...

“It hurts like hell” – Billionaire, David Imonitie continues to mourn the Death of...

19 of Trump accusers to share their sexual harassment stories today

Its been 3 years of F**king You, Filling your TANK – Anita Joseph’s husband...

Johnson Olumide - June 8, 2020 0
Talk of couples whom are crazy in love and then you need not go further searching as Nollywood controversial and curvaceous actress Anita Joseph...