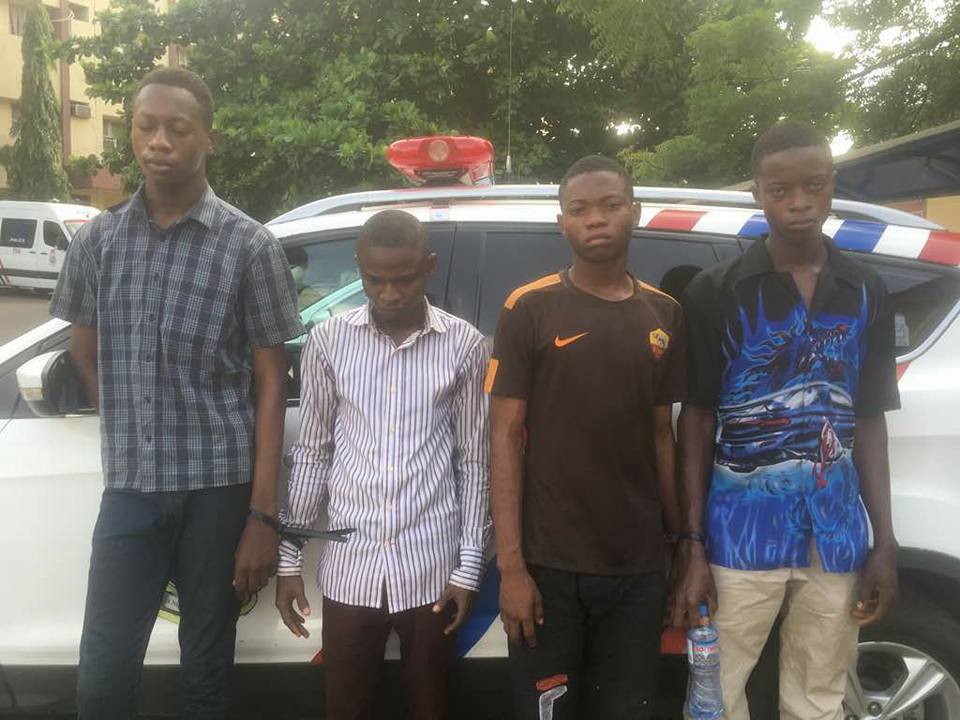 The suspects namely; Samuel Kayode, 28-year-old from Ondo State, Adebayo Ifeoluwa, 17-year-old from Osun State, Alayande Ahmed and Elusode Festus, 20 years from Edo State were all arrested in their respective states. Samuel Kayode, a part time teacher in two secondary schools based in Ilesa, disclosed that he also taught Physics and Mathematics in a private tutorial class where he assisted candidates who are planning to write the WASSCE examination with questions and already prepared answers for the candidates.

According to Samuel, after working as a tutorial teacher for seven years, he got a part-time employment in two private schools in Ilesa, Osun State, where he also helped students preparing for WASSCE with leaked questions and prepared answers, adding that he did this to make a living.

“I got a part-time teaching job when I couldn’t secure a Government teaching job after graduating for NCE and couldn’t settle for the little salary I’m been paid by my employers, so I decided to help myself with what I have been doing as a tutorial teacher by helping lazy students source for WASSCE examination question and answer via some online platforms that deal in the illegal business.

READ ALSO
See the top 10 highest paid celebrities on Instagram, Number one is a female

After registering candidates in their various centers, I then liaise with some anonymous people who we call ‘Web Masters’. The Web Masters have insiders in various examination boards in the country with leaked questions paper and buy such from them”, he explained.

“There are many websites operated by the Web Masters, where leaked WASSCE questions and prepared answers are sold to subscribing candidates. Some of these websites include; www.examloaded.com, www.guruscamp.com, www. ceebook.net, www. Solutionclass.com and www.expotab.com.

They also hawk NECO, GCE and JAMB examinations papers with answers”, he stated.

He explained further, “the contact person on Web master is called ‘Dan’ who doesn’t pick calls but only deal on text messages and WhatsApp messages. Mr. Dan usually sell answers via WhatsApp or issues a quick login password that can be issued on the website and immediately redirect the user to the page where the already prepared answers are.

I then retail the answers have bought from Mr. Dan to candidate customers who I coordinate carefully on a WhatsApp platform named ‘WAEC VIP’ where candidates waits patiently to receive the answers to the question after sending to me a #400 recharge cards of any network.

“Sometime this year, just before the on-going WASSCE examination, I belong to a sports betting WhatsApp group where we forecast for games. One of the member therein sent a broadcast about how to get WASSCE questions and left a WhatsApp link which I joined before thinking of creating my own ‘MCC’ after a thoughtful assumption of how profitable the venture looks”.

Also, Elusode Festus from Ekpoma in Edo State failed school certificate examination before becoming an apprentice at a Welding and metal fabrication shop, also chose the retailing of leaked WASSCE question and answer as a side hustle.

The 22 year Elusode said he got to know about the deal on a website where he downloaded songs before a pop asking if you want to receive exam result, click here which he did and dully registered so as to start the retailing of the answers among candidates in the area.

On his own part, Alayande Ahmad, said “I got to know about WASSCE questions and answers racketeering on a website after dropping out of secondary at SS2 due to lack of funds but I promised to assist my friends who were preparing to sit for WASSCE at all cost.

I contacted an admin on a WhatsApp group where answers were being sold to candidates who registered with him after sending to him a N400 recharge card. The subscribers receive questions and answers few hours before their examination”.

Parading the suspect, Lagos State Commissioner of Police, Mr. Imohimi Edgal advised parents to monitor their wards preparation for examination instead of indulging them in examination malpractices.

The suspects have been transferred to the State CID for further investigations.

Eddie Andy - April 4, 2018 0
Singer Kevin Sean who was accused by his ex-wife Henrietta this morning of releasing her nudes has finally reacted to the claims. Sean took to...

My pastor said prayers are more efficient when you go naked – Sex therapist,...

My Boyfriend Doesn’t Complain When I Flaunt My Bum Bum – Popular Nollywood Actress...

Eddie Andy - March 8, 2018 0
Nollywood actress, Pat Ugwu can be considered as one of the new generation actresses that making waves in the industry. She is at the same...

Drake and Wizkid perform hit song Come Closer together on stage at the 02...

Johnson Olumide - April 9, 2019 0
Nigerian musician, Wizkid and the Canadian-born rapper, Drake hug each other as they perform their hit song, 'Come Closer'Wizkid was the first Nigerian artist...