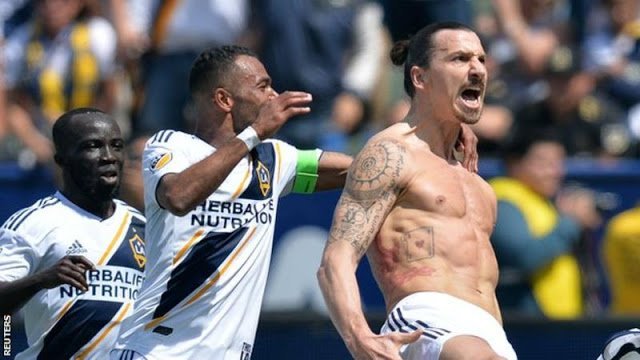 Zlatan Ibrahimovic marked his LA Galaxy debut with a match-winning cameo as his side came from 3-0 down to beat new boys Los Angeles FC.

The 36-year-old, stealing the show once more, came on with 20 minutes left and scored a remarkable equaliser from 35 yards before heading in a stoppage-time winner
“I heard the crowd saying ‘We want Zlatan,
we want Zlatan, ‘ he said.
“So I gave them Zlatan, They were pushing me, and I was giving back.”
Galaxy had pulled a goal back before Ibrahimovic was sent on in the 71st minute. And, after he was involved in the build-up for Chris Pontius’ header, Zlatan struck.
There did not appear to be any immediate danger as an LA FC goal-kick was nodded back upfield but the former Manchester United forward crashed an unstoppable shot on the bounce over the head of goalkeeper Tyler Miller.
And the Swede scored the winner in stoppage time, nodding in at the near post from what might have been an offside position.

Say hello to the latest house own- Anita Joseph celebrates

Violette - November 10, 2019 0
Nigeria actress and heavy shape goddess Anita Joseph has Just acquired new property in ibeju lekki which one of the most prominent places in...

Violette - January 15, 2020 0
American actress and media personality, Kim Kardashian had taken to her Instagram Page to give her millions of fans a stunning view of her...

Violette - January 22, 2020 0
Popular Nigeria media personality, Toke Makinwa is set to launch her new brand, TM Beauty as a follow up to her growing Hand bag...

Violette - May 12, 2020 0
Sensational Ghanaian Rapper, Joey B, has hinted on releasing a new EP titled “CD”, after keeping his fans in the dark for almost two...