Home News Husband And Wife Arrested For Stealing Over $400,000 From Bank (Photo) 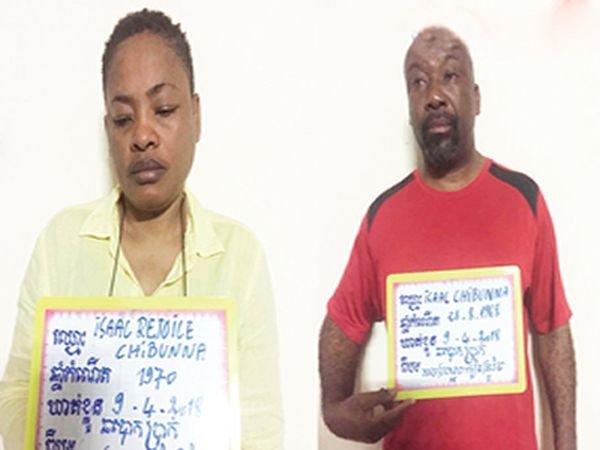 READ ALSO
Huddah Monroe Bares Butt At The Beach (photos)
The pulse.com reports that the deputy Police Chief of Prampi Makara district, Chea Sok, revealed that the husband and wife were arrested for defrauding the Foreign Trade Bank (FTB) of US $424,999 through electronic system.

Sok said: “Now the accused are in custody at the district police station and we will send them to court today (Monday).
The arrests were made following the filing of a lawsuit by the victim, a 36-year-old representative of a bank and head of FTB Operations, in Tuol Kork district, identified as Leng Sovannavat.”
In the lawsuit, the accused are alleged to have stolen over $424,999. The deputy persecutor of Phnom Penh court, Mr. Reil Sophen, charged the couple as scammers before submitting the case before the judge and detaining the suspects.
The police said: “FTB bank received the information from City Bank from the USA about transferring money for 50,000 USD to Nigerian couple account at FTB bank on March 26, 2018.”
The reports revealed that the couple went to the FTB bank to withdraw 424,999 USD on March 29, and then transferred the money to China so they had only 15,869 USD left in their bank account.

READ ALSO
“I want a baby boy too” – Annie Idibia reacts to Sunmbo Adeoye’s cute video
It wasn’t until April 5, that the FTB bank got the information from City Bank in the USA that the Nigerian couple had scammed the money from City Bank’s client.
The pulse.com also reports that all attempts by FTB bank to contact the couple by phone and email failed.
However, the suspects were arrested immediately they arrived at FTB bank to take the money left in their bank account.

Shocking As Shatta Bandle Now Has A Net Worth of $9.7billion Which Makes Him...

Violette - November 10, 2019 0
Ghanian Instagram Personality, Idris Firdaus popularly known as Shatta Bandle seems to be edging closer to what he claimed earlier on as he now...

Violette - December 24, 2020 0
Award-winning Nigerian comedian Craze Clown is currently in a celebratory mood as he celebrates another milestone in his life and this milestone he will...

Nicki Minaj hot like a Slut, as She Bends over for Meek Mill

Johnson Olumide - May 12, 2020 0
The Rap Power Couple looking good and sexually intent. as they both posed for the camera's backstage where Nicki Minaj later performed with Queen...

My movie has restored many homes – Lizzy Anjorin

Johnson Olumide - April 30, 2018 0
Nollywood actress Lizzy Anjorin is out here boasting about her movie Owo Naira Bet STATING IT HAS Infact healed many homes. In her words;   LET THEM...

Johnson Olumide - January 2, 2020 0
Nollywood actress,Linda Osifo is the proud owner of her own home in Lagos . She took to instagram to share her testimony .She wrote Na small...