Singer K Michelle announced early this year that she was taking out her butt implants because it was already causing problems for her.

Weeks later, she revealed she had done the surgery, then shared photos of her new slimmer body, though most people said they saw no difference.

Runtown may end up in jail over leaked sex tape

The singer has now revealed that the surgery wasn’t all smooth and she almost died due to complications after the surgery.

She said she was rushed to the emergency room over 4 times and it was discovered that the silicone from her butt implants had spread. As a result, she developed an infection and almost couldnt use her legs. She was rushed into surgery last Wednesday and is now in recovery.

Read what she wrote below. 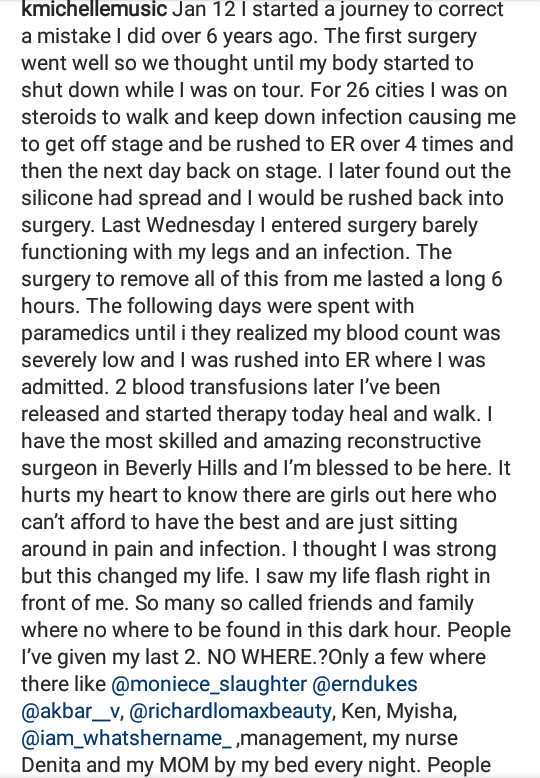 Violette - October 14, 2021 0
Grammy award-winning singer and songwriter, Wizkid has continued his dominance in the music industry as he bags a new record on a streaming platform,...

Former BBNaija housemates, Teddy A and BamBam got engaged

Johnson Olumide - March 21, 2020 0
Curvy Nollywood actress, Daniella Okeke stepped out in style looking all stunning as she flaunts her curves in this figure-hugging dress.   Daniella Okeke is a...

BBNAIJA: Such A Gorgeous Woman- Bisola Adores Herself As She Rocks A Beautiful Flowing...

Violette - November 10, 2019 0
Former Big Brother Naija housemate, Bisola continues to shows off to her fans and lovelies how fashionable and beautiful she can be as she...

Johnson Olumide - March 27, 2018 0
2017 BBNaija housemate Gifty has shared her thoughts about this year’s show tagged ‘Double Wahala.’ According to Gifty, the show does not deserve to be...