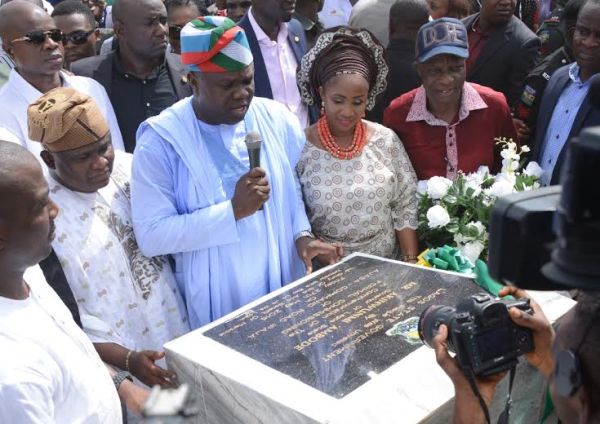 The Lagos State Government on Wednesday said that it has completed the construction and rehabilitation of 450 major roads and 50 other impactful projects in the last three years to make life comfortable and build a sustainable environment for residents and visitors.

Commissioner for Works and Infrastructure, Engr. Adebowale Akinsanya who said this at the ongoing Ministerial Press Briefing held at the Bagauda Kaltho Press Centre in Alausa as part of activities to mark the third year anniversary of Governor Akinwunmi Ambode’s administration.

The commissioner said aside the completed projects, several others were at various stages of completion and would contribute to the vision to make Lagos emerge as Africa’s model smart city and global economic and financial hub.

He said provision of world class infrastructural facilities to support the growing population of the State has been one of the cardinal programmes of the Ambode administration, and that it was gratifying that the effort was serving the intended purpose.

“In the course of the three years, we have vigorously pursued the maintenance of existing roads, the rehabilitation and expansion of highways, as well as the construction of new bridges. We have continually worked to deliver projects that will directly impact on the lives of all Lagosians.

“This commitment to infrastructural renewal, expansion, upgrading and regeneration is borne out of the fact that an efficient and integrated transportation system can only be birthed through the provision of appropriate infrastructure.

“Roughly for the last three years, if you look at the major road projects and others we have embarked on and completed, I can conveniently reveal that we have done between 450 and 500 and we still have a lot in stock for the people. In terms of the ongoing, we have about 60 or 70 projects,” Akinsanya said.

Giving a list of some of the road projects completed in the last one year, Akinsanya said the State Government delivered pedestrian bridges, laybys and slip road at Ojodu Berger; delivered the Jubilee Bridge and adjourning roads at Abule Egba; constructed Jubilee flyover at Ajah and replaced the Ajah roundabout with signalized intersection and also rehabilitated Freedom Road and Admiralty Road in Lekki; completed 21 Lagos-Ogun boundary roads with two bridges; constructed Aradagun-Iworo-Ajido Bridge in Badagry; rehabilitated and upgraded arterial roads in Epe and Omotayo Banwo/Kola Iyaomolere Road, as well as Alapere Road and Junction Improvement Works in Ketu, five new pedestrian bridges, among others.

Speaking on others, Akinsanya said the phase one of Bus Rapid Transit (BRT) lane from Oshodi to Abule Egba was now at 55 per cent completion stage, and that government was working towards delivering it between September and October this year, while the Multi-Agency Office Complex in Alausa was also progressing well.

Also speaking on activities of Lagos State Public Works Corporation (LSPWC) in the last one year, Special Adviser to the Governor on Public Works and Drainages, Engr Temidayo Erinle said the corporation carried out major rehabilitation works on 31 roads out of which 23 were completed, seven ongoing and one just approved for execution.

He said palliative work including patching and sectional over-lay were carried out on 115 roads, while in order to curtail flooding, the government introduced an initiative for clearing and maintenance of all primary outfall, secondary and tertiary drainage channels across the State out of which ten major ones are being been attended to.

On her part, General Manager, Lagos State Infrastructure Maintenance and Regulatory Agency (LASIMRA), Mrs Olayemi Oni, said in the last one year, the State Government through the agency alleviated the problem of towers and masts structure collapse through consistent monitoring and compliance to ethical value and standard.

She said a total of 16 illegal and abandoned masts have so far been decommissioned, while also urging telecommunication operators having such masts to report to the agency or risk similar fate.

Davido: Die Hard Fan Tattoos His Face In The Middle Of Her Breasts (photos)

Johnson Olumide - March 19, 2018 0
A Lady and an apparent die-hard fan of DMW boss, Davido has tattooed his face in the middle of her breasts According to her, she’s...

Seems Mayorkun is up to Something

Violette - November 10, 2019 0
Popular Nigeria music act, Mayorkun seems to be cooking something hot as he share an adorable picture of himself. The singer who has been consistent...

#BBNaija: Not having s*x with Kiddwaya last night was difficult – Erica (Video)

Violette - August 11, 2020 0
Erica have finally open up on what she went through during her first night with Kiddwaya at the head of house room. It would be...

Violette - October 24, 2021 0
Popular Nigerian singer and songwriter, Davido on Saturday night reunited with his third baby mama, Chioma Rowland, to celebrate the 2nd birthday of their...

Violette - January 1, 2021 0
Veteran Nollywood actress Shaffy Bello have showered her millions of fans into the new year in a stunning fashion that showed she's ready for...