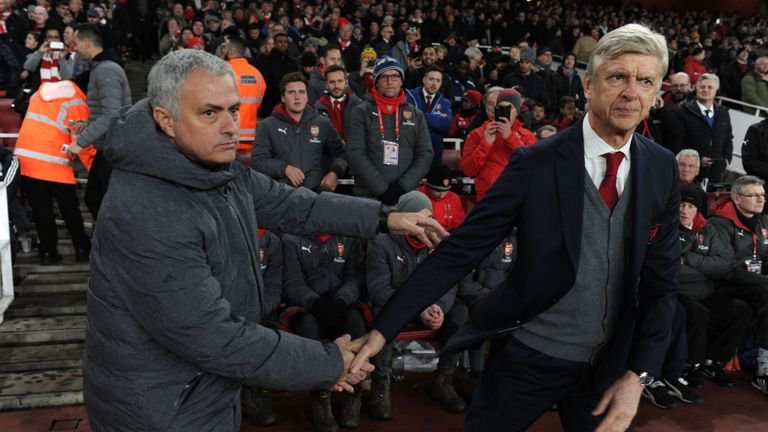 Jose Mourinho insists he has nothing but respect for Arsene Wenger and hopes he can be friends with the “iconic” departing Arsenal manager in the future.
Wenger announced on Friday that he will call time on his 22-year association with the Gunners at the end of the season.
Few have had a more volatile relationship with the 68-year-old than Mourinho, who famously labelled the Frenchman a specialist in failure in 2014.
“If he respects me even 50 per cent of what I respect him we can even be friends in the future,” Mourinho told Sky Sports News. “I have lots of respect for him.
“But the reality is that he was at Arsenal, he was the champion and I came to the country in 2004 and wanted to steal his title. That’s football.
“But in the end I respect him a lot, I tried to show that in the past couple of years there were no more problems at a different stage of my career with a different profile.
“I feel sorry that after Sir Alex Ferguson – but it was obviously Sir Alex’s decision [to leave] – the next big one, the next iconic one is leaving the Premier League.”

Johnson Olumide - February 17, 2020 0
The Queen of blogging in Nigeria, Linda Ikeji also known has a former model. she downed this beautiful White dress to a wedding occasion...

11 Signs That He Sees You As His Future Wife

Johnson Olumide - December 29, 2018 0
The world of relationship is really complicated. With deceits and heartbreaks everywhere. it is difficult to distinguish genuine guys from those that are only there...

Johnson Olumide - April 3, 2021 0
Nigerian music producer, Don Jazzy revealed a bombshell of information about his personal life that no one knew before now. According to Don Jazzy, he...

Lala Anthony and Kelly Rowland Enjoys Girls Night out on a dinner Date In...

Johnson Olumide - July 16, 2019 0
The  two celebrities are masters of their chosen craft,Kelly a former destiny child group singer whom since had lived past  the shadows of Beyonce,...

Johnson Olumide - May 12, 2020 0
Fast-rising female artist, Wendy Shay gave a spectacular performance at the just held BF Suma Concert at the Fantasy Dome on Saturday, 27th October 2018. However, a...