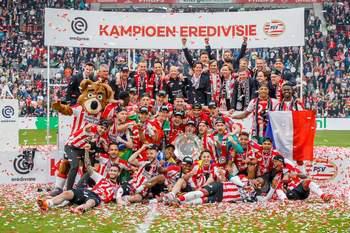 Gaston Pereiro, Luuk De Jong and Steven Bergwijn scored to seal the silverware in fine style as they emphatically ended Feyenoord’s stint as champions.
Second-placed Ajax entered Sunday’s encounter as the only club capable of catching the leaders, but their hopes of reducing the gap back to four points faded in the space of 15 first-half minutes.
Pereiro bundled in the opener midway through the half before Luuk De Jong headed in Joshua Brenet’s cross to kick-start the celebrations at Philips Stadion.
Bergwijn added polish to the scoreline by poking in a third nine minutes after the interval and Ajax’s bid to prolong the hosts’ wait only unravelled further in the final 10 minutes.
Nicolas Tagliafico earned a second yellow and Siem de Jong received a straight red for a crude studs-up challenge, meaning the Amsterdam outfit had two players dismissed in a single Eredivisie match for the first time in their history.

#IbadanSocialMediaFestival 2017 Comes Up This November