Home Entertainment Nigerian Entertainment News Reasons Why Rumors Of Tiwa Savage Dating Wizkid Can’t Be True
For a while now, there have been speculations that a romance is blooming between Nigerian Star artistes TiwaSavage and Wizkid, the embers of these rumours were flamed after the two talented singers featured on one song MALO!

Since the release of the song, they have had reasons to perform together on many occasions and on different stages!

READ ALSO
UPDATE! Davido Refers To Chioma As ‘wife’ As He Debunks Break Up Rumour (Photos)

All was still professional and seen in that light until Tiwa Savage’s last birthday, Wizkid who rarely celebrates people with many words did not just celebrate Tiwa with many words but also with many photos, he even called her ‘his queen’, leaving Tiwa emotional!

Since then, the chemistry between them had skyrocketed making Nigerians assume and also conclude that ‘Love lives here’ especially since Tiwa Savage is reportedly single again.

Despite the fingers pointing at love and chemistry, we still have to take a deep breath and ask our selves if Wizkid and Tiwa could actually damn many consequences and love each other.

The fact that Wizkid is already a ‘husband’ to three women and a father of three boys must be put into consideration here, would Wizzy break all three hearts at once, especially the heart of his latest baby mama Jada to date Tiwa Savage? 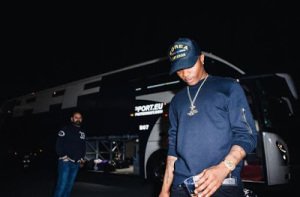 Note also that Tiwa has much more at stake if she goes ahead to date the younger star, her estranged husband is one of those ‘stakes’ he would gladly tell the world ‘I told you so’… Would Tiwa risk this bad publicity for love?

Considering his track record where love is concerned, Wizkid would rather not publicize it if truly they are having an affair, but we all know how hard it is to hide true love!

#BBNaija 2018: What Housemates told Adesua Wellington on her visit

The age difference is another strong factor! Would Tiwa date a man younger than her by almost a decade?

They are just enjoying a ‘deep’ friendship and if indeed it is a deep relationship… Well, who are we to say No?

Fans reacts as Wizkid announces date for his upcoming project