Home Sports Boxing Revealed:- Anthony Joshua Is Worth Millions Of Pounds But His Close Family... 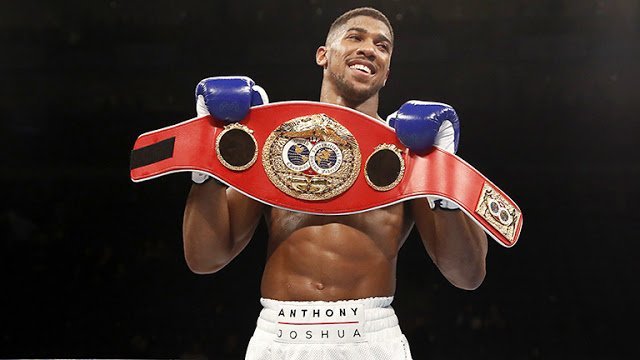 A new report has shown how Anthony Joshua’s close family lives in poverty even though he is worth several millions of pounds.
Anthony Joshua is on track to becoming boxing’s first billionaire – but his family in Nigeria live in poverty.
Ring superstar Anthony Joshua, 28, is believed to have raked in £13million for fighting Joseph Parker last night, which he won on points via a unanimous decision.
He has earned at least £30m more from just 19 bouts.

And sponsorship deals have pushed that total to around £100m. Yet the Daily Star Sunday can exclusively reveal that Joshua’s aunts and uncles on his father’s side are living in deprived conditions compared to their favourite nephew.
Their house – in Sagamu, Ogun State – sits on a dirt street called Akarigbo Road. On each side are rickety buildings, and ramshackle trading stalls stretch into the distance.
An open drainage gulley runs outside the house. The building, home to at least three generations of the Joshua family including great grandad Prince Daniel Adebambo Joshua, is small and has mismatched windows.
But the family are hugely proud of their boy – and have his picture over the front door.
Anthony’s uncle Benjamin Ademola Joshua said: “We feel so happy. We feel so elated. We can’t even express our joy that this sort of thing can come to our family because we are not noisemakers in our family.
“We never knew that we could come to the limelight like that.
He added: “Anthony’s father comes to Nigeria at least six times in a year. He has got a mighty building in Ijebu-Ode.

READ ALSO
Ex BBNaija housemate,Uriel Oputa Flaunts Major Cleavages In New Photos
“There are many attached to that town. They all have houses there, seven houses in Ijebu-Ode. But the first point of call is the Joshua house here in Sagamu.”
Benjamin revealed that the Olympic gold medallist – who went to school in Nigeria – has been too busy with his boxing to visit Sagamu for 14 years.
He said: “Because Anthony is celebrating now he cannot just leave his domain. Before, he used to come on holidays. When he comes he stays with his grandparents in Ijebu-Ode. He has got a lovely house in Ijebu-Ode.”

Officials in Ogun State plan to rename the local sports stadium after Anthony, along with one of the area’s most famous roads, Cinema Street.
The heavyweight hero is a big believer in helping the underprivileged, and has a track record of supporting charities.
He has funded his old boxing club in Finchley and the GB boxing squad, and even treated his ex-trainer to a £90,000 BMW.
But so far he has not invested in similar projects in Nigeria.
Oba Adewale Osiberu, a relative of Anthony’s mum, said: “People are now showing interest in boxing and we are hoping the world champion will assist the town.”
But Benjamin added: “In our family, we respect each other’s opinion so much. We don’t stampede anybody into taking action. So we will leave that to him.”

Violette - November 22, 2019 0
Davido’s Fiancée and baby Mama Chioma Avril Adeleke has uploaded a video of herself and her son dancing and having fun on her Instagram...

Johnson Olumide - June 8, 2019 0
About love(AL) by Josh Kamba is an expression of love and feelings in the season of lovers. The sososo crooner decides to combine a little...

Johnson Olumide - December 20, 2019 0
The queen of the Queen Album got all eyes on deck at last night's MTV VMAs, as she rocked a one piece bathing suit...

Adedokun Moses - May 19, 2021 0
Veteran American model and media personality, Naomi Campbell has announced tbe arrival of her first child at the age of 50. Talking about one of...