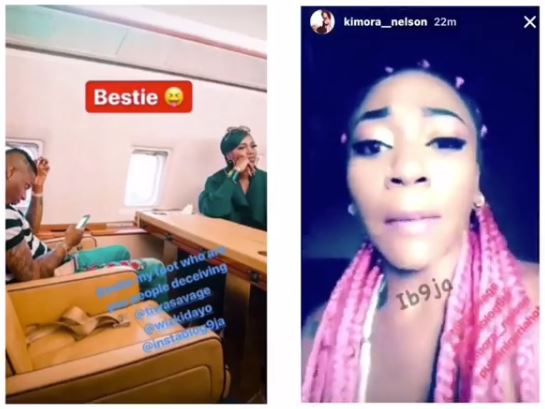 Though there has been no certain proof, for quite some time now, fans have questioned the ongoing relationship between Wizkid and recently single Tiwa Savage as the two have been found in uncompromising positions and actions in public and social media

Nigerian Singer Kimora has taken to Instagram to blast Tiwa Savage over an alleged sexcapade with Wizkid, adding that Tiwa is forcing herself on Wizkid

Am hustling like am Still broke,yet I got a street named after me- Tiwa Savage

According to the female singer who declared that she is a number one fan of Savage, she is disappointed that Tiwa would be sleeping with Wizkid.

She noted that Nigerians are not dumb and she doesn’t care what any body has to say but she is fed up of the public display of affection and unnecessary sexual activities like kissing on stage, while the duo pretend to be best friends.

Princess Vitarah Claims Her Tweeter has been Hacked, after Tweets of her Shading Tiwa Savage

She queried Wizkid for not learning from his counterpart, Davido who picked a young lady to share his life with instead of gallivanting with an old and used rag.

Kimora blasted Savage and even trolled the singer over her failed marriage, warning that if she should come back crying to Nigerians, should anything go wrong between her and Wizkid, then she would be served hot!