Home News Unbelievable: How 55 Politicians And Others Stole N1.3 Trillion From The National... 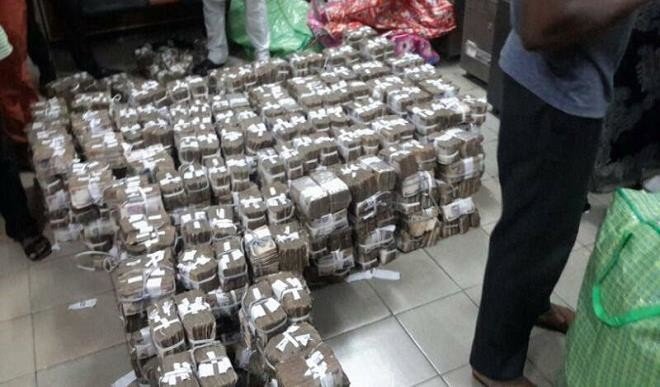 New details have shown how as many as fifty-five politicians and others stole a whopping N1.3 trillion from the national purse.

A new report by the Socio-Economic Rights and Accountability Project (SERAP) has revealed how “55 politicians, high-level public officials and leaders allegedly stole N1, 354tr between 2006 and 2013 from the nation’s treasury.”

According to the report, “The amount of money embezzled, misappropriated or stolen by public officials and leaders in the private between 2013 and 2017 has galloped beyond the contemplation of average Nigerians.

Evidence abound that Judges, judicial officers, lawyers and military officers are participants in the frenzy of despoliation of national wealth.”

The 112 pages report launched today at the CITI-HEIGHT Hotels, Ikeja, Lagos is titled: “Letting the Big Fish Swim” How Those Accused of High-Level Corruption are Getting away with their Crimes and Profiting from Nigeria’s Legacy of Impunity.

The report presented to the media by Dr. Esa Onoja, Senior Lecturer of Law, Litigation and Professional ethics at the Nigerian Law School, Abuja Campus discloses that “While the main anti-corruption agencies secured more than 1500 non-high profile convictions between 2000-2017, they could only muster 10 high profile convictions between the periods.”

According to the report, “In the investigation, prosecution and trial of high profile corruption cases in Nigeria, justice is imprisoned by snares contrived by actors in the legal community in aid of looters.”

The report listed “high profile cases of corruption prosecuted by anti-corruption agencies between 2000 and 2017 as numbering 177 out of which 167 are pending.

All the participants expressed commitment to ensure the full implementation of the recommendations contained in the report.

The report read in part: “Most corruption cases against high profile defendants witness delays tactics and tricks by defendants to truncate fair trial.

The cases depict the stark reality of a captive justice system at the mercy of high profile offenders and their platoon of defence counsel.

The negligible number of conviction of high profile defendants explains the probable calculus of offenders that the risk of apprehension and conviction is low.”

“Alhaji Shettima Bulama (former CEO of Bank of the North) was convicted after trial. The sentences in each of these cases did not reflect the gravity of the offences.

There is a sense that all the offenders, including Tafa Balogun and Celilia Ibru, who publicly returned large amounts of money, were able to retain substantial proceeds of crime. Diepreye Alamieyeseigha and Alhaji Shettima Bulama were granted Presidential pardon by President Goodluck Jonathan.

The outcome of conviction of the high profile offenders seems to be a clear signal that crime pays when you are high profile.”

“The record of proceedings from courts and law reports paint a vivid and irrefutable picture of the causes of truncation of prosecution of high profile in Nigeria.

The trajectory of cases through investigation to trial and appeals qualitatively reveals strong evidence of a nexus between weak institutional capacity on the one hand and attitudes of actors in the criminal justice sector that hamstring orderly and efficient collation and presentation of evidence in court, which militates against impartial determination of corruption cases.”

“The sense of simmering undercurrent of commodification of justice and commercialized legal contortions and reasoning pervades investigation, prosecution and trial of high profile corruption cases in Nigeria.

Justice stands in the dock this game of musical chairs presided by technical justice while high profile offenders gleefully sit in comfort with their loot, fortified by the efficacy of a vast array of subterfuge and jiggery-pokery of their lawyers, with seeming active and passive connivance of actors in the legal community.”

According to him, “I can say without any fear of contradiction that the judiciary has developed an inbuilt mechanism to remove bad judges.

Between 1999 and 2017 not less than 100 judges have been sanctioned. No other institution in Nigeria in Nigeria can boast of that record.

SERAP deserves commendation for elevating the debate about corruption beyond the adoption of Fela Anikulapo-kuti’s record entitled “Authority Stealing”. Unlike the two parties singing “you be thief, I no be thief” SERAP has produced a 112-page occasional publication.”

Falana’s remarks read in part: “With the abolition of stay of proceedings politically exposed persons and their lawyers are no longer permitted to frustrate their prosecution.

In commending SERAP for producing this report let me say that the areas covered are a tip of the iceberg. Not a single reference was made to the most corrupt institutions in the country.”

“One of them is the Nigerian National Petroleum Corporation (NNPC) which is currently headed by President Mohammadu Buhari. A government’s agency, the National extractive industries transparency initiative has accused the NNPC of illegally withholding $16.8 billion from the federation account.”

“Since the NNPC cannot justify the fraudulent importation of fuel it says that it is not a public institution when asked to produce the certified true copies of importation documents. But i assure you the documents will be produced either now or in future.

A government that says it is fighting corruption cannot be allowed to engage in reckless opacity.”

The report also states: “The immunity clause has metamorphosed into a potent vehicle of corruption and ignoble conduct.

Successful prosecution of high profile cases unduly suffer because of the tendency of courts to favour legalism and technical construction of criminal and procedural legislations instead of real justice.High profile corruption defendants have conveniently latched on to claims of alleged breach of fundamental right to prevent investigation, prosecution and orderly conduct of cases by courts.

Instances of sly and twisted claims of breach of fundamental rights by high profile defendants against anti-corruption agencies abound and are readily available from law reports.”

That is the main reason for the low level of conviction of high profile corruption defendants in Nigeria. However, no institution is perfect. Periodic reform is beneficial because it ensures that laws and institutions keep up with the times.”

“The National Assembly should amend provisions in anti-corruption legislations, criminal justice legislations, and the Evidence Act that enables defendants to prolong trials or that are disadvantageous to efficient presentation of cases in court.

The Executive should avoid interference with the work of anti-corruption agencies. Money appropriated in budgets should be released as and when due.”

Training and re-training of investigators and prosecutors should be a priority. There should be less dependence on personnel from other agencies. The Nigerian Bar Association should establish a monitoring mechanism to check abuse of court process by legal practitioners.

The Legal Practitioners Disciplinary Committee should be empowered to discipline even the sacred cows.”