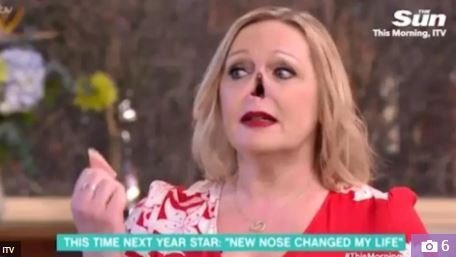 Fans of This Morning TV show, a popular TV show in Britain, were left in shock when a guest on the show bravely pulled off her nose without warning and revealed it to be a fake.

Viewers couldn’t believe it when Jayne Hardman, 48, reached up and removed the incredibly realistic prosthetic in front of Eamonn Holmes and Ruth Langsford.

Last week The Sun revealed Jayne’s nose had collapsed after her 14st pet dog knocked its head into her face.

The inspirational guest was explaining how ITV’s This Time Next Year had helped transform her face, when she reached up and showed the nose was cleverly attached to her face by magnets.

Eamonn asked: “You’re not worrying about it coming off?”

The woman replied: “I have sneezed it off once. So I do tend to hold my nose now.”

Viewers had no idea her nose was not real

Her brave appearance on This Morning comes after she opened up to The Sun about how her dog jumping up and knocking its head into her face had left her diagnosed with a rare and potentially deadly auto-immune disease.

The family pet jumped and “headbutted” Jayne, causing blood to pour from her nose.

She was told by doctors that it was not broken and to apply ice. But the swelling got worse over the next six months and, after going to her GP and ear, nose and throat specialists, its cause remained a mystery.

It was only in June 2014, when she was referred to one of Britain’s top nose surgeons, Mr David Roberts, based at Guys and St Thomas’ Hospital in London, that she was diagnosed with Wegener’s granulomatosis, which had attacked the tissue in her nose.

Fans praised her on Twitter for telling her incredible story and raising awareness for other sufferers on This Morning.

One wrote: “Really feel for everything she’s been through and I’m so glad she’s happy now.”

Another commented: “I am ecstatic that she has found a way forward and not let this disease get the better of her! What an inspiration.”

A third shared: “What a brave woman!!! Imagine just losing your nose like that!”

Some viewers were taken a little by surprise as she showed them how the “amazing” prosthetic works.

Jayne told the Sun that doctors had no choice but to remove her nose and fit a prosthetic. Yet despite the life-changing surgery, Jayne, 48, is remarkably calm about it.

She explained: “I take it off every night before I go to bed and put a plaster over the hole.

“Then in the morning I steam the hole and rinse it out, because it still produces mucus like everyone else’s.

“Overnight, I put the nose in an old wooden Twinings tea box in the bathroom along with the first few versions of the prosthetic before they got this one just right.

“My hearing aids are also in there because the disease affected my ears.

“They’re making me a summer nose which is a bit darker for when I start to get a bit more of a tan. I’m expecting that in June.

“The good thing is that my new nose is the perfect match for my skin tone, so I don’t need to put any make-up on it.

“In fact the only problem is sneezing — I have to make sure I hold it if I’m going to sneeze.

“The first time I didn’t, we were having Sunday dinner at home and it shot off. It ended up between my son’s legs. My family are very relaxed about it — it’s a source of humour for them.”

The mum of two shows off her nose in the new series of ITV’s This Time Next Year, which sees host Davina McCall meet people determined to change their lives in just 12 months. Jayne’s is one of the most incredible stories to feature.

Far from blaming CeCe, who died in 2015, Jayne believes she has the dog to thank for alerting her to the condition.

Jayne, who now has new mastiff Savina, said: “I think CeCe was trying to tell me, ‘There’s something wrong with your nose.’

“When I eventually got diagnosed the doctor said, ‘Your dog saved your life.’

“Once you get this condition, it’s fatal if you don’t get treated.”