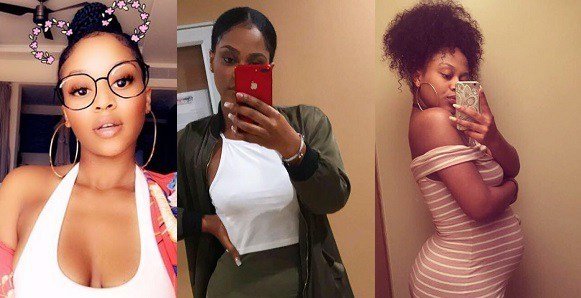 Davido’s assurance investment on the love of his life, Chioma has left both of his baby mamas green with envy.

Davido’s 2nd babymama, Amanda has been quoted stating on her Instalive that she wants to get pregnant again.

She wrote: “I want that my pregnant glow back” in a throwback footage shared on her social media page.

Davido met the 25-year-old lady while he was on a business trip to the United States.

We can’t tell much about Amanda or their romance talks, but what we can tell about her is that she is a student at Georgia State University and she lives in Atlanta, Georgia.

Amanda made headlines her baby’s birth, following a shade directed at Davido.

The shade came after Davido who was in Ghana with his crew went back to his hotel room with a girl he met at show where he performed.

This apparently didn’t go down well with his Atlanta based babymama, Amanda, who then threw shade saying “Got a good girl…but hoes is his choice”.

Davido’s first babymama Sophia Momodu who saw the post and presumed she was among those Amanda called “hoes”, which made her drop a post in response.

She wrote; “She’s throwing a shade? I don’t play fetch with bitches. Besides, one more post and I’ll drag you to the ends of the earth you don’t know! Try me! Sophia Momodu however in a new post, denied the fight.

Shortly after the incident, Davido’s second baby mama also disclosed that she found motherhood stressful, as she took to her Snapchat account to lament on her new found motherly role.

The US based lady revealed that she employed the use of technology to help pacify her daughter, Hailey.

However, the second daughter of Davido prefers her mother’s touch and doesn’t not like the substitute pacifier.

The young mother wondered why technology can’t give her baby the motherly touch she desperately desires.