Airtel Conquers Glo, Smile And Others In Ibadan Niwbqr Report

It turned out that LTE coverage was nowhere near as wide as expected. Of the five carriers tested, only two (Smile and Airtel) had LTE coverage in a substantial part of the route evaluated.

A separate report comparing the LTE deployment quality for those two have been prepared. In this report, we have ranked all five service providers in terms of the quality of user experience on their networks be they LTE, 3G or 2G. Our ranking is based on measurement tests such as: Web-Browsing Responsiveness, FTP Download Test, FTP Upload Test and Ping Test.

Our tests measure the customer user experience as they use it for common applications such as web browsing or data downloads, irrespective of the radio access technology used. 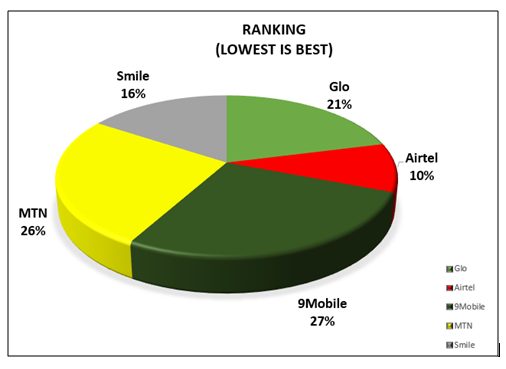 Web-Browsing Responsiveness on Airtel’s network was at least three times better than that of any other Service Providers benchmarked. Airtel was seconded by Smile; MTN had the lowest Web-Browsing Responsiveness. Also, Airtel had the best Ping Packet delay, followed by Smile while 9Mobile had the worst Ping Packet delay. It is not surprising that Airtel and Smile rank first and second, respectively since they provide the most LTE coverage along the route evaluated.

9mobile: NCC are out for ‘consolidation’ — good news for Glo and Airtel

Below is a brief analysis of Airtel’s LTE performance in Ibadan based on the route driven.Airtel’s LTE deployment in Ibadan is a good example of how a network should operate and perform based on the user experience. We are also congratulating Airtel for a job well done in the LTE deployment in Ibadan as itsnetwork came first in our NIWBQR. Airtel is the first company in Ibadan to provide a well-optimized LTE network. The only comparable LTE network among the markets that we have
tested in Nigeria (Lagos, Ibadan, Abuja and Benin) is Globacom’s network in Victoria Island, Lagos.

Airtel seems to have properly engineered and tested its LTE network, in the areas we evaluated in Ibadan, before its commercial deployment. This is the level of care we wish other service providers would take in commercial deployment of LTE for the encouragement of the adoption of broadband service in the country. Surely, network operators face challenges that should not be an excuse for ignoring basic Radio Frequency deployment engineering practices in areas where those challenges do not exist.” However, Airtel engineers should pay attention to the UE Transmit power of it network.

OTHERS:With the exception of Airtel and Smile, other Service Providers do not currently have extensive 4G coverage in Ibadan.

Besides the ranking of the quality of RF deployment for LTE, NIWBQR provides detailed User Equipment logs that allow in-depth analysis of the RF signal and Over The Air Layer 3 messages. Analysis of these messages and the Radio Frequency signals allow Enextgen Wireless Ltd to identify areas of sub-optimal performance and the necessary changes to clean them up. This is a different type of report thatistypically availablefrom performance monitoring services such as Open Signals or Root metrics. It is a report that informs service providersabout how to put themselves at a competitive advantage over theircompetitors, thereby increasing subscriber loyalty and creating opportunities for substantially increased revenue generation.

NIWBQR provides mobile wireless broadband communication service providers the ability to bring theirnetworks up to the performance level
expected of a properly deployed LTE network. Service Providers that use Managed Services vendors for performance monitoring and optimization can use, NIWBQR for independent evaluation of the quality of their networks from the perspectives of the end-user.

People who support Joe Biden are not worthy to preach to me – BBNaija’s...

Buhari’s wife warns IGP Against intimidating the Dakolos on Twitter

Violette - July 21, 2019 0
Wife of Nigeria's President, Aisha Buhari has cautioned the Inspector General of Police against threatening Busola Dakolo and her better half, Timi over the...

XXXTentacion murder suspect wants $10, 000 to start his own private investigation

Eddie Andy - August 14, 2018 0
One of the men arrested and charged with the murder of rapper XXXTentacion is requesting for a private investigator to look into prosecutors' evidence...

Adedokun Moses - November 10, 2019 0
Former Big Brother Naija housemate, Joe Abdallah is currently in a mourning mood after he lost his dad. The reality TV show star who was...

Adedokun Moses - December 5, 2019 0
Popular Ghanaian actress, Jackie Appiah has today December 5, 2019 celebrated her birthday in a grand style. The actress and movie producer took to her...