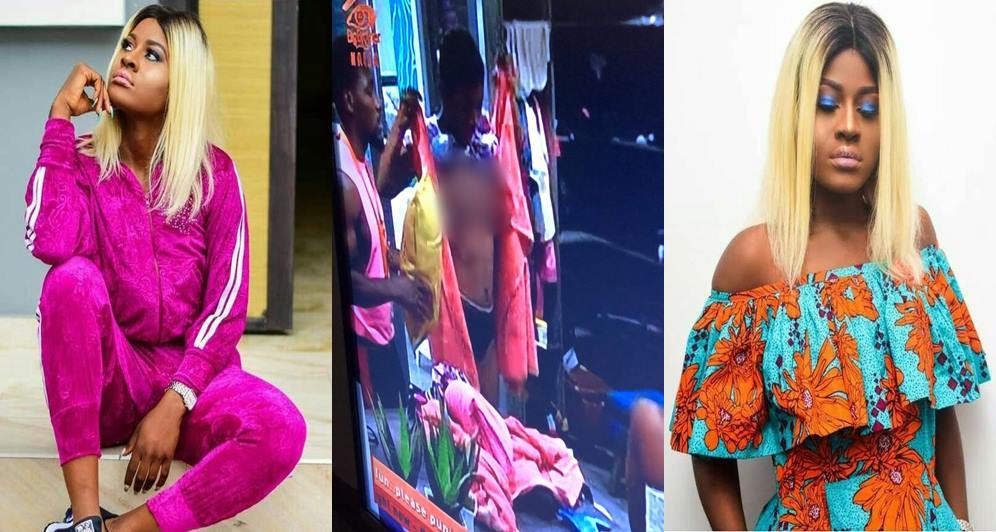 One of the housemates in the just-concluded edition, Alex has been having it both hot and friendly from foes and friends alike.

Recall that during the show, Alex experienced what could pass for a wardrobe malfunction but a lot of viewers across the internet believe she intentionally flashed her boobs to attract more fans, perhaps from the male folks.

However, the Enugu State indigene in a recent interview had debunked the claims and explained that it was an honest mistake just like some people felt.

Read the Excerpts Below:

My original name is Asogwa Amuche Sandra. However, I didn’t like the name, Sandra, so I changed it to Alexandra though I prefer Alex because it is an uncommon name for a girl. I am from Nsukka in Enugu State. I am the first of my parents’ three children.

One of the childhood memories I cherish was when I celebrated my birthday at a place called Mr Fans in Lagos. It was really nice and I think I still have some pictures. I also remember my experience during the Ikeja Cantonment bomb blasts in 2001. It was a very terrible experience for me because we had a family outing that day. Till this day, I still have goose pimples whenever I think about that incident. My childhood ambition was to become a celebrity.

When I told my parents that I was going to partake in Big Brother Naija, they were surprised but they supported me. I am sure if I had told my dad earlier, he would have expressed concern about my education. My time in the house was lovely. I treated people the same way they treated me. Everyone saw my relationship with Tobi and we are still very close; I can tell him anything that bothers me. We are very good friends. If it leads to a romantic relationship in future, then our foundation would have been strong.

Before I went to the house, I was popular because in school, we always had a Miss Popular Award Programme. However, BBN has made me more popular. There was a time I had to run away from greeting people because I almost missed my flight.

We can all be whatever we want to be, irrespective of who you think you are. With prayers to God, you can make it to anywhere. You can go through anything with the right people around you. I remember there was a time I almost gave up in the house but I had positive people around me.

My challenge lies in not knowing the right way to go about what I want to do. Everyone is trying to change me; though I don’t see it as a challenge. I just feel that people should not judge me for not living my life the way they chose to live theirs. It is also not fair for people to say that I am not a lady because I dress in a certain way.

I really don’t have much to say about that but I think it is a very wrong for anyone to say that I am from a poor background. I won’t describe my family as poor because I haven’t suffered all my life. At some point, we had financial issues but that was in the past. I wasn’t supposed to say it in the house but that is okay. Everyone is entitled to their opinions about my background because a person’s background doesn’t determine where he or she is going to end up. Coming from a poor background and being where I am today is something I should be proud of. Also, the issue of my father’s illness is personal. I didn’t win the money but right now, I am going to work hard to ensure he gets proper treatment.

That is something I haven’t even discussed. I think that issue was grossly misinterpreted and it is something I don’t even want to explain right now. I want everyone to believe whatever they want to believe. I was close to Princess’ brother but there was never a story like that about him.

Showing my breast while I was in the house was an honest mistake. It was unintentional and it was not done because I wanted to have more fans

I love to talk and make people happy. I also enjoy dancing.

I am single. I was single before going to the house and I am still single. I like a man who can understand me. Honestly, I would say ‘no’ to any man I am taller than. Generally, I like good people that understand me and are good to me.

Whenever I want to relax, I would dance. It is something I love so much and I can do that the whole day.

I love to wear anything stylish and I can do without fashion accessories. I love to dress nicely and I am not a party to nudity. A lot of people see me as a tomboy but I am not. I just feel that I can rock any style

#BBNaija: “You offered to eat my pu-cee in the bathroom” – Cross turns down giving Angel Head Game (Video)

Violette - May 12, 2020 0
A man is facing charges for selling counterfeit opioid drugs to Mac Miller a few days before the rapper’s death which resulted as a...

K Michelle Hangs out with Amber Rose at an Event

Johnson Olumide - February 17, 2020 0
The 'Judge Me' Singer who has been rocked by naked photos of her released on christmas day,and also announcing her forthcoming third album through her...

Johnson Olumide - March 21, 2018 0
As we prepare for the fifth anniversary of Africa Fashion Week Nigeria, we look forward to the formation of African designers from different countries...