Home News Dubai-based Billionaire, Mompha replies those blasting him for buying a house for... 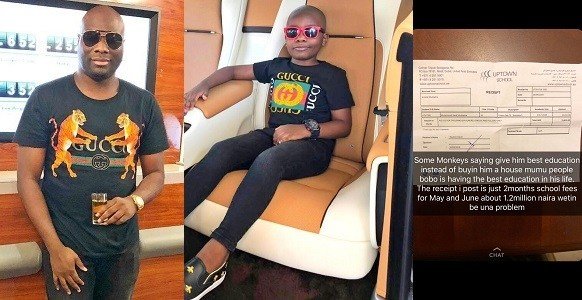 Dubai-Based billionaire Mompha recently acquired a multi-million naira house for his son, as a birthday gift for his 6th birthday.

But some folks on social media have a problem with it.. They claim he’s too “young” to own a house, instead, his father, should have invested the money he used in purchasing the house  in quality Education for his child.

Mompha has since responded to all critics directed at him. Mompha says he pays the sum of N1.2 million naira on a bi-monthly basis.

He shared a screenshot of his son’s school fees receipt, captioning it: “Some monkeys saying vie him best education, instead of buying him a house, mumu people. Bobo is having the best education in his life. The receipt I pose is just 2 months school fees for May and June, about 1.2 million naira. Weytin be una problem.” he wrote on his Snapchat.