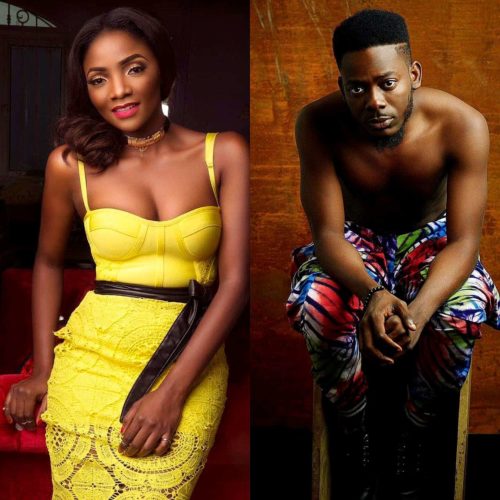 Adekunle Gold recently shed light on the nature of the relationship he shares with Simi, during a listening session of his recently released About 30 album. He said Simi is his partner in music, particularly in the area of songwriting.

The two singers, Adekunle Gold and Simi are known to share a strong chemistry that has produced powerful emotion-filled music but it is unsure whether their chemistry also exists in the form of romance and they both have not help matters by refusing to confirm it, leaving speculations to swell on the topic.

However, Adekunle Gold was willing to share stories about their music relationship. He took a moment to appreciate the Joromi singer for her support in his music career, especially because she mixes his music and help him the area of song composition. He even said that he learnt song writing from Simi and that he seeks her validation before putting out his material. The hype on Simi was that much and we understand.

Adekunle Gold, the urban high life music revolutionist, recently released his sophomore album titled About 30 and there’s enough hint that suggests it is a classic. The lead single of the album – IRE has had so much impact that it has been dubbed ‘the Nigerian prayer anthem of 2018.’

As expected, Simi had a hand in the album preparation process. She mixed majority of the songs on the album and also played a role in the area of song writing. Even though their love lives remains private, their music relationship at least, has been a thing of beauty.

‘I fight Simi (@symplysimi) all the time because she brings the best out of me.’ ‘Any song Simi doesn’t validate, I don’t put out. She mixed and mastered all my songs.’ – Adekunle Gold (@adekunlegold) showers love and praise on Simi last night, during his album listening party. Awwww ? ? This love is sweet o! Who else wants to love? #thediarymag #TDMmusic #entertainment #adekunlegold #About30