As the FIFA World Cup for Russia draws nearer, many Nigerians are drumming support for the Super Eagles both in Nigeria and Russia.

Supporters have been purchasing jerseys en masse to show support for the national football team. 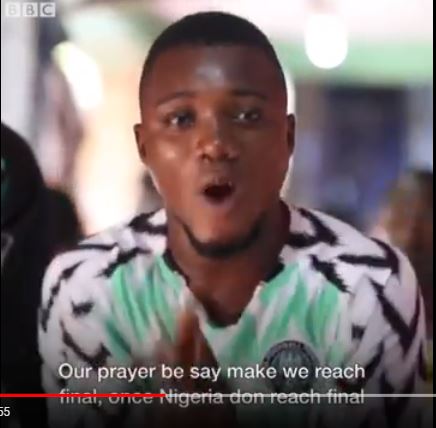 Mallam Shehu Dikko who is the 2nd Vice President and Chairman of NFF Marketing, Sponsorship and TV Rights Committee said; “the new Super Eagles’ jersey will soon be in the markets all over the would including some Nike shops in different parts of Nigeria on the 29th of May, 2018”

But the production of the jerseys has taken a phoney twist as some individuals have circulated replicas around the market before the official release date by Nike.

The traders interviewed by the BBC Pidgin have bragged that sales of the fake jerseys have been explosive.

“I pray Nigeria reaches the finals. Once we make it to the finals of the world cup, I will import a container-load of jerseys for big sales” Obiora, a local trader from the South-eastern part of Nigeria said.

“I have been selling the Nigerian jerseys even before they were unveiled on the internet. All my customers have been going crazy about the jerseys. I have successfully sold more than 3,000 pieces so far” he added.

A BBC correspondent also spoke with other traders in the business of selling fake jerseys which the Nigeria Football Federation hasn’t endorsed.

One of the traders proudly rocking the replica jersey said his is original as he imported them from Thailand. The traders also help customers in cresting their names on the jerseys for a feee.

Another trader who called the replica jersey a ‘top grade’ said the price ranges from N7,000 to N10,000 per unit.

It would be recalled that TORI NEWS had earlier reported that most of the new Super Eagles jerseys in circulation are fake. Further checks revealed that Nigerians are indifferent about purchasing immitations. They believe the original one which costs $85 (N30,600) is too expensive for them.

One Twitter user identified as Iya Oni Jersey is also in the notorious business of selling fake Super Eagles jerseys for N15,000 per unit on the micro-blogging platform.

This act of Intellectual Property Theft and Copyright Abuse is criminal but it appears the society is comfortable with it.

It remains unclear if the leadership of the NFF will take judicial actions against the traders of replica Super Eagles Jerseys.

Lady Accuses Obama Dmw, A Member of Davido’s Team Of Sleeping With Her Without...

Violette - December 9, 2019 0
A lady has claimed that a member of Davido's team, popularly called Obama Dmw slept with her without paying her dues. Recall that Davido was...

Actress Iyabo Ojo Sent Me To Prison, Spoiled My Life As A Journalist –...

Johnson Olumide - March 21, 2020 0
Controversial Media Personality and journalists Kemi olunoyo flashes back to when she was sent to jail in 2017 under the influence Iyabo Ojo. Kemi Olunoyo...

Violette - March 17, 2020 0
A celebrity has come forward to say her mind. Let's avoid what can easily be avoided, she says. The celebrity is a Nigerian actress with...