Uriel has defended singer, Lola Rae who just birthed a baby girl for her boyfriend, Tekno.

This is coming after Noble Igwe trolled Lola for abandoning her career to carry a child for her singer boyfriend, while he pursued and worked on his.

Noble Igwe had earlier written on Twitter: “He made you stay away from your music to have a baby but he stayed back to push his hustle. #life”

People are saying why did lola Rae get pregnant she’s now a baby mama… No she’s Mother… All those people looking Down snubbing her… I’m sure if she reached out to you for anything music related you would have posted her!! Maka she’s not trending currently. Biko my sister look after your baby well Nobody chooses blessings.

The music industry is hard, when I went for sponsorship my bum was on the menu… ahhh. 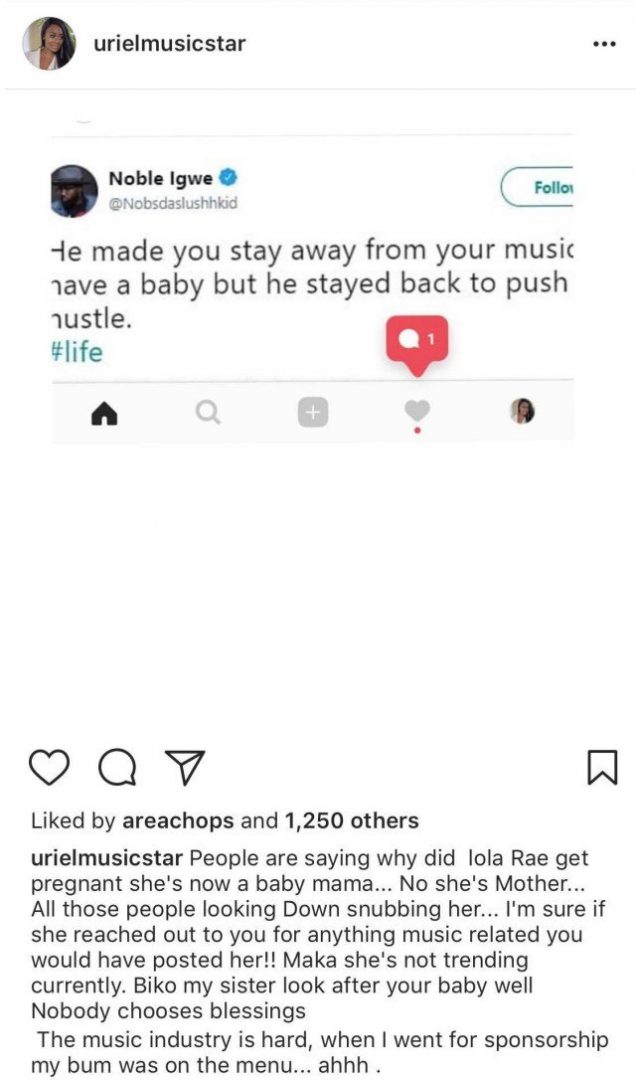 I was an up coming artist but after they cut my microphone during a show I forgot my lyrics.. I ran for my life ,i even forgot my shoe.

This is not a shade on Noble igwe because we are cool (.he used to post my songs for free) I’ve heard so many people say she’s should face her music… .erm she did I don’t think she’s done.

I’m sure her after baby body will be lit.. just look at Tiwa

Read some reactions below:

@okwuosaifeoma: Tiwa was blessed to have husband as her manager and he knew the nitty gritty of the music industry, to cap it all she was/still is immensely talented, beautiful, charismatic and swaglicious cant say that for most wannabes…Noble Igwe on the other hand should learn to think before speaking….however one wants to become a mama whilist living in/giving up their career is no BUSINESS of his….especially if both parties agree mutually…..when they start picking on him and his home and family hope he’d be able to WITHSTAND IT and not go beserk. Everybody is now a family expert. Uriel dont give up on your singing dream….you’d get there one way or another by Gods Grace…..your talented, beautiful and charismatic.

@slimfit_nancy: Me don’t know why people thinks is an abomination to have kids, my dear kids are special gifts from God, the more we welcome them into our homes, the more they bring blessings and goodluck to us, I think she followed the right path, cos she can still go back to her music, but our kids comes first no matter the circumstances. Tnk you @urielmusicstar for supporting her, # women support women is the key#

@jayygalcollections: I dint even know the lora rae before, but because of this baby saga, I now know, went as far as digging up her music, but guess what,I say today that she having a baby in disguise is definitely a blessing

@kingokey_drag: This igwe boy is gonna get his big head burst wide open sooner or later. WTF is his business or anybody’s? Social media has made is possible for senseless fool to think that they are smart. MINDYADAMNBUSINESS

@realityinks: @urielmusicstar from your post, I understand that you and #nobleigwe are cool, but you need to hurt him with the truth, rather than pamper with lies or try to sit on the fence. What he said was disrespectful to #techno, #lola and the baby.

Having baby is a blessing and it’s not the end of the world/career. We have mothers in the entertainment industries that are doing beautifully well, guess that’s part of the reason he kept is wife and daughter far from social media and when he put up their pictures he will never tag them ? but he thinks it’s nice talking trash about people’s personal life, that’s low life. What a shame!!!

On the other hand, well said concerning what you said to #lola ??She will surely bounce back, be it music or not #womenempowerment #motivation #sisters ??

@winnys_touch: This life marriage is not for everyone if having a baby Will make her Happy so be it and who said one most be married before they can have a child my dear be happy and fuck what people think no matter what you do they will still talk pls let them talk 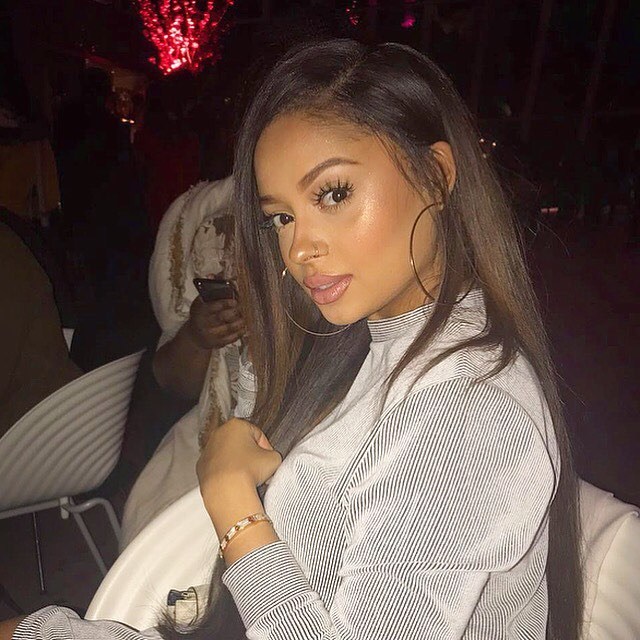