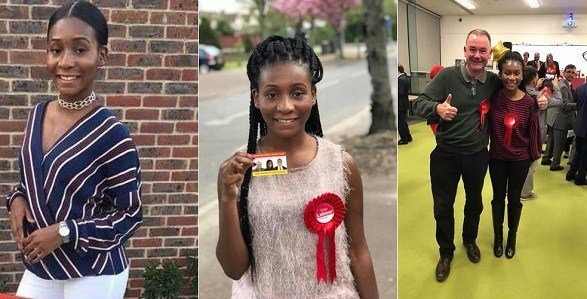 Meet 22 year old Princess Elizabeth Bright, a Nigerian that has just been elected as the youngest Councillor in the United Kingdom.

Princess who will be representing Eastbrook ward in Dagenham, was elected into office on Thursday, May 3rd.

Her mother, Councillor Afolasade Bright from the Borough of Barking and Dagenham Council was also re-elected.

She is also a former speaker/civic mayor London borough of Hackney.

“Officially been elected as the youngest Labour Councillor in my borough representing the fantastic Eastbrook Ward at the tender age of 22 alongside 2 amazing people Mick McCarthy and Tony Ramsay.

“We have worked so hard in this election, with one of the most target wards, but All the hard work, commitment and tears have finally paid off.

“Would like to say Massive thank you to All who have supported Eastbrook in this campaign.

“From the CLP, to the borough-wide councillors, my Amazing MP Jon Cruddas who canvassed with me till the last hour, volunteers, friends and of course to the most supportive parents Afolasade Bright & Pastor Gbolahan Bright.” she added.

“There are now Four Councillors all ladies from the same Parish, RCCG The Master’s Sanctuary and they include; 22 years old Cllr Princess Bright, her mum; Cllr Afolasade Bright, Cllr Donna Lumsden and Cllr Dorothy Akwaboah.

“A big congratulations to all of them.”