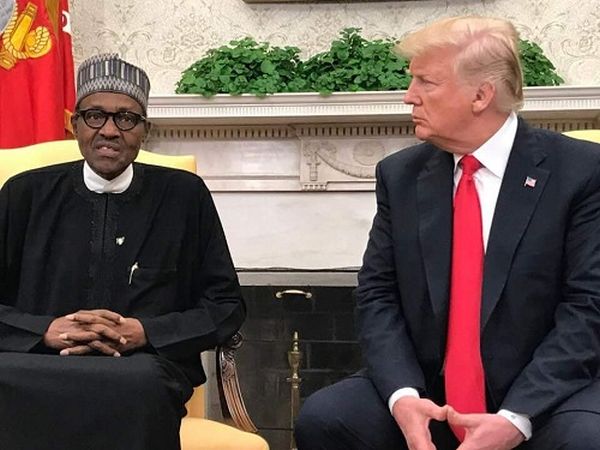 But the U.S. will continue to offer its support for Nigeria to proffer a lasting solution to the menace.

“Nigeria has massive reputation for corruption,” Mr Trump said while standing by Mr Buhari. “I discussed it with the president and we agreed to do something on it.”

“We are working to cut” the corruption cases down, Mr Trump added.

Mr Buhari did not object to the observation, which he had repeatedly acknowledged publicly himself, and instead showed appreciation for the support of the U.S.

Asked whether he was offended by Mr Trump’s alleged denigration of African countries in the past, Mr Buhari said he was skeptical about the media reports and would rather not comment on them.

“I am being careful about what the press says about others and myself. But the best thing for me to do is to keep quiet,” Mr Buhari said.

Mr Buhari said his government had done a lot to curb human rights abuses in Nigeria, especially in the ongoing war against Boko Haram.

“The government of Nigeria remains committed to human right,” even in the course of fighting terrorism, Mr Buhari said.

Mr Buhari said he had no problem with the presence of American troops in Nigeria, saying they are only in his country to offer training and other support that are crucial to winning the war against terrorism.

“This is one of the best thing the United States could do for our country,” Mr Buhari said when asked whether he was concerned about the police role being played by America across the world.

Mr Trump said Mr Buhari’s comments were fair, but added that he would want to see America scale back its supervisory role across the world while improving trade with other countries.

READ ALSO
Trump Loses, as UN votes 128-9 to reject US decision on Jerusalem

“We wanna police our country. What we want to do now is to open Nigeria and other countries to trade,” he said.

On the concerns about low patronage of Nigerian crude by the U.S. in recent years, Mr Buhari said he would not tell another country what to do. He praised the U.S. for its technological innovations that have helped reduce its reliance on oil.