Home News Pandemonium as Wild Monkey follows farmer back to his house in Cross... 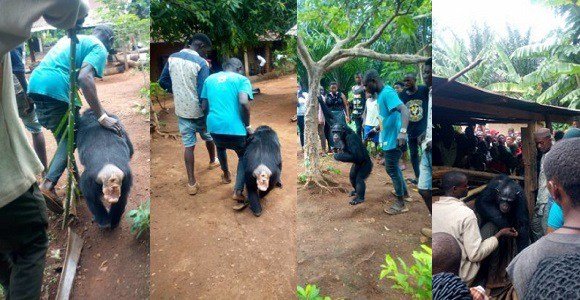 There was reportedly commotion in a village in Cross river state last weekend after a gorilla living in the wild met a farmer in the bush and followed him home.

It was reported that residents of Bitiah Irruan village in Boki LGA of Cross river State all gathered at the farmer’s home to witness and see the animal for themselves as many said such incident has never happened before.

Trying to figure out why the gorilla followed the farmer home, some said it was possible the animal no longer had food in the bushes, so he followed the man home, hoping to get food from there.

Others insinuated it could be a sign of favour to the farmer, another said the gorilla lost his way while moving from Bumaji village to Bitiah where an NGO takes care of them.

Pretty Nigerian Lady who ventured into Agriculture shares her story

A Facebook user, Osang Gabriel shared the photos and wrote:

Wonders shall not end. A gorilla followed a farmer from the bush to his house at bitiah irruan boki cross River State to his living house live

Dubai-based Billionaire, Mompha replies those blasting him for buying a house for his 6 year old son