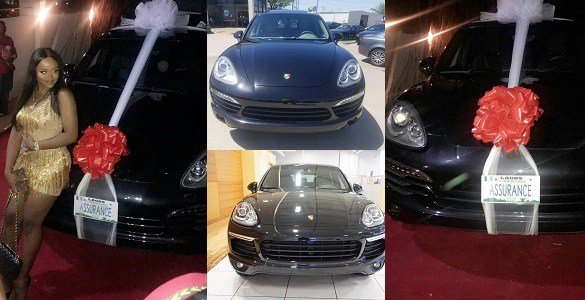 Amidst all the hoopla surrounding the luxury SUV vehicle popular singer, David Adeleke aka Davido bought for his girlfriend Chioma, different figures have been bandied about concerning the value of the Porsche.

Some news sources put the value of the car at N45 million, this is nowhere near the case, as the car is clearly a tokunbo vehicle.

Even brand new Cayennes can be obtained for less than N45 million.

According to research conducted by auto aficionado’s, the truck is a 2011 model which retails from about ($25,000) N10 million, exclusive of customs and other charges.

This is still a large sum of money but nowhere near the N45 million that would be spent to obtain a newer model of the vehicle.

Even the 2018 model starts retailing from about $65000 (N24 million) and certainly to get it to Nigeria will still be less than N40 million, depending on how ambitious the car dealer is.

Still that doesnt take away from the fact that Davido has certainly splurged on the love of his life. Its just not as big a spluge as certain media elements have hyped it to be.

Davido Buys A N45 Million Porsche For His Girlfriend, Chioma As Her Birthday Gift (See Photos)