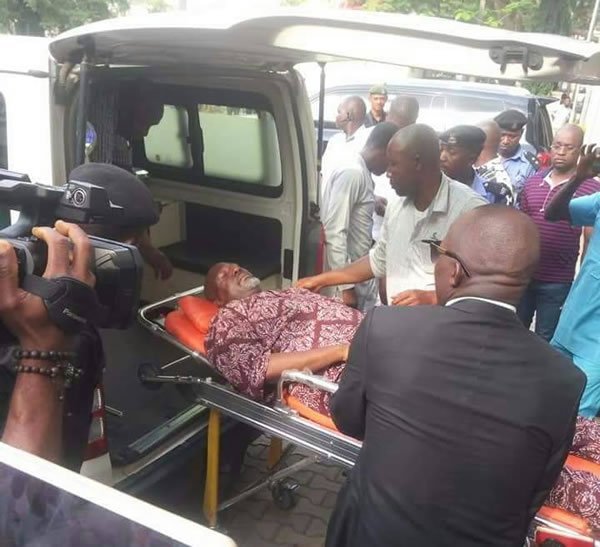 The senator who was this morning brought into the court in a police ambulance was accused of armed sponsoring thugs and will be remanded till June 11th, 2018.

The Force headquarters, in a statement yesterday by its spokesman, Jimoh Moshood had said, “Senator Dino Melaye was arraigned in court by the Police today, 2nd May, 2018 at the Chief Magistrate Court, Wuse, Abuja for Criminal conspiracy, causing damage to government property, attempted suicide and escape from lawful custody.”

My hubby wants to kill me with sex -Wife cries out

Senator Dino Melaye was arraigned on Wednesday at a Chief Magistrates Court, Wuse for criminal conspiracy and granted bail for N90 million. He was immediately re-arrested and led to face other criminal charges against him in Lokoja, Kogi State.

Senator Dino Melaye was brought into the court premises today in an ambulance amid heavy security.

Actress, Bimbo Ademoye gets dragged for allegedly dating and sharing nude photos with a...

Johnson Olumide - April 20, 2021 0
Nollywood fast rising actress, Bimbo Ademoye is curretly been dragged for allegedly dating and sharing her nude photos with a married man. According to instagram,controversial...

Rihanna Renting Out Beverly Hills Mansion For $80,000 Per Month

Johnson Olumide - July 14, 2021 0
American singer, songwriter, and award winner female artiste, Rihanna is giving folks a once-in-a-lifetime opportunity because you can live in her posh mansion in...

Violette - January 13, 2020 0
American singer and actor, Will Smith has revealed how he reacted when he heard of Tupac Shakur's close friendship with his wife Jada Pinkett. Tupac...