Home News Tiwa Savage vs Wizkid vs Chioma on N248k Fendi Tee – Who... 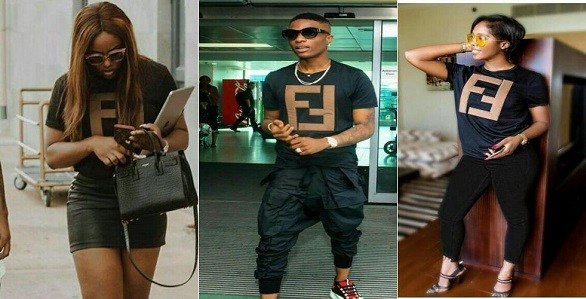 While Tiwa rocked hers last month, Wizkid touched down London last night in the same tee.

Davido’s girlfriend, Chef Chioma also rocked hers as she recently secured a ‘Cooking Show’ deal while embarking on a trip to Abuja.

Apparently, Davido wasn’t joking about his bae, Chioma getting an endorsement worth millions of Naira.

After he gifted her with a N45million Porsche at her birthday dinner and set social media buzzing, Davido tweeted that Chioma started receiving offers for endorsement deals.

He had earlier announced on Twitter that he rejected a N60 million deal for her, telling them to increase the money to N100million. Well, it appears that she has agreed to sign onto the brand.

Davido accompanied her to the brand’s photo-shoot in Abuja and shared the BTS photo below which he tagged overnight multimillionaire:

So we ask, who do you think rocked the Fendi Tee-Shirt better amongst the trio?