PARIS (AP) — Serena Williams has called off her Grand Slam comeback, pulling out of the French Open because of a chest injury before she was supposed to play Maria Sharapova.

Serena Williams tried to play through the pain of an injured chest muscle. Eventually, barely able to serve, she knew she had to call off her Grand Slam comeback.

Williams pulled out of the French Open less than an hour before she was supposed to face Maria Sharapova in a fourth-round showdown Monday, the most-anticipated match of the tournament so far. The announcement came two days after the 36-year-old American initially felt something was wrong during a singles victory. But she hid that bit of information — even from her coach — and a day after Williams struggled through a doubles loss with her sister, Venus.

This was Williams’ first major tournament in 16 months, and her first as a mother. She was pregnant when she won the Australian Open in January 2017 for her 23rd Grand Slam singles championship, the most for anyone during tennis’ 50-year professional era. Her baby was born last September.

“I have given up so much to be here. There is times where I’m on the court and I’m practicing, and I look on the monitor, and I see my daughter and she’s playing, and I want to be there,” Williams said. “But I know that these are the sacrifices you have to make to live out your dream. And I have made every sacrifice that I could. So it’s extremely disappointing.” 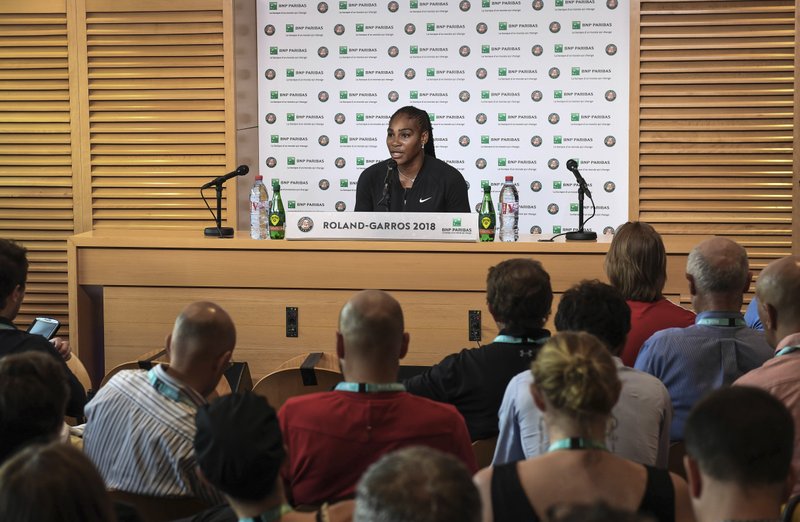 Serena Williams is out of the French Open.

Her voice trembled a bit during a brief news conference, where she explained she will get an MRI on Tuesday and consult with doctors before figuring out what comes next. Her coach, Patrick Mouratoglou, said in an interview that an ultrasound revealed the injury to the muscle, but the extent wasn’t clear.

“The fact that I physically can’t serve at all is a good indication that maybe I should just go back to the drawing board and stay positive,” Williams said, “and try to get better and not get it to a point where it could be a lot worse.” 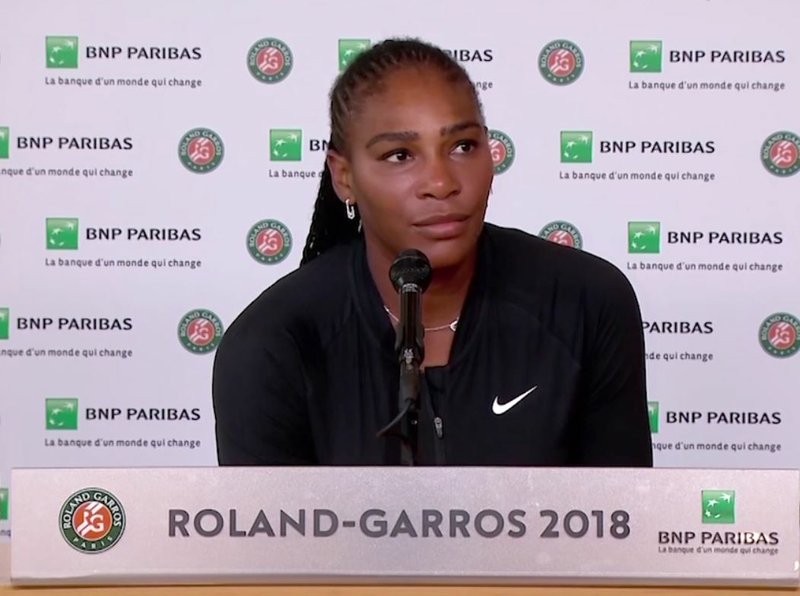 In a statement released by the tournament, Sharapova wished Williams “a speedy recovery.” This would have been their 22nd career meeting; Williams has won 19, including the past 18. Because of the withdrawal, this does not count as a victory for Sharapova, who will play 2016 French Open champion Garbine Muguruza on Wednesday.

Oddly enough, Muguruza didn’t have to put forth much effort in the fourth round, either. Her opponent, Lesia Tsurenko, stopped because of an injury after only two games.

No. 1 Simona Halep, a two-time runner-up at Roland Garros, will play former No. 1 Angelique Kerber, a two-time major champion elsewhere, in Wednesday’s other quarterfinal after both picked up easy straight-set wins in the fourth round.

The quarterfinals Tuesday are Sloane Stephens vs. Daria Kasatkina, and Madison Keys vs. Yulia Putintseva. Kasatkina eliminated Australian Open champion Caroline Wozniacki 7-6 (5), 6-3 in a match that resumed Monday after being suspended a night earlier because of darkness at 3-all in the second set.

The day’s biggest buzz was about a match that never took place.

Williams said she first was troubled by her pectoral muscle during the best performance of her return, a 6-3, 6-4 win in the third round against 11th-seeded Julia Goerges on Saturday. But Mouratoglou had no idea there was an issue.

She didn’t tell him she was hurting?

“No, because she knew I would tell her not to play the doubles,” he told the AP. “I would have made her cancel the doubles, believe me.”

During Sunday’s doubles, though, Williams showed signs of trouble. By the third set, she hit first serves at about 80 mph (130 kph), about 40 mph (70 kph) slower than she can. Between points, she repeatedly jabbed a thumb into her chest to massage the muscle.

“At the end, she was just pushing the ball. … That’s when I knew she had a problem. I didn’t know what kind of problem, but I knew there was something really wrong,” Mouratoglou said. “Basically, she couldn’t play.”

Williams tried taping up the muscle for doubles, but that didn’t help. And while she’s “pretty much had every injury in the book,” this was the first time dealing with this particular malady. 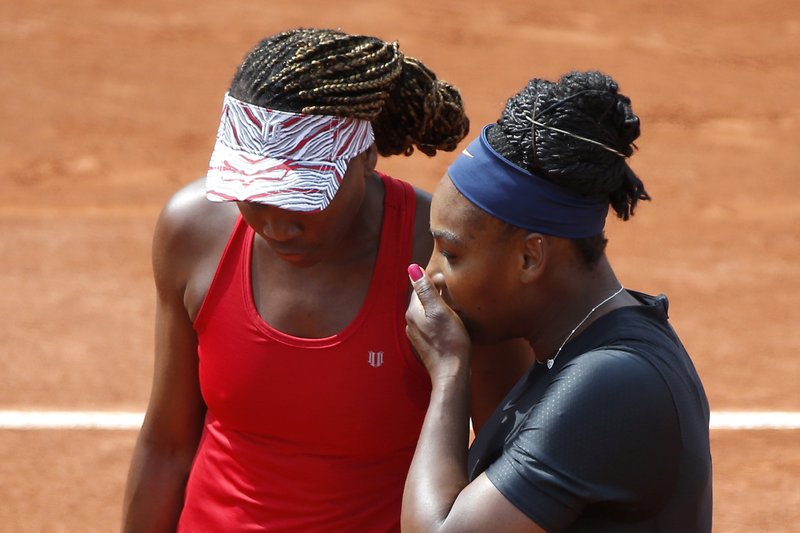 Serena Williams didn’t tell her coach she was injured before she played doubles with her sister, Venus.

Mouratoglou said they held a practice session Monday morning, holding out hope that maybe rain in the forecast would postpone the match against Sharapova.

“We might gain one more day, and you never know how it feels tomorrow. So we had to wait,” he said. “But we saw the sky was still blue … and we thought, ‘No chance.’”

Sharapova’s coach, Thomas Hogstedt, said that word of Williams’ withdrawal arrived while his player was doing warmup exercises outside the locker room at Court Philippe Chatrier, waiting for the match ahead of theirs to finish.

“She was keen on playing Serena. It’s a little bit sad, I think, for everyone. Everybody looked forward to this match,” Hogstedt said. “This match has had so much build-up.”

Johnson Olumide - February 17, 2020 0
It been all about christmas this month and so many colorful and beautiful christmas trees and house decorations. so many ways to celebrate christmas and...

Violette - September 27, 2020 0
Sexy Nollywood actress, Lilian Afegbai have taken to her social media platforms to voice out her frustration over an ex big Brother Naija housemate...

Violette - November 10, 2019 0
Despite not being in contention to win the ultimate prize at the reality show, things seems to be going well for Khafi. The former big...

Serena Williams Beat Maria Sharapova for the 18th Time to Advance to the Semifinals...

Johnson Olumide - February 17, 2020 0
The 34-year-old Tennis Player took another Step closer for her seventh  Australian Open title and getting her 22nd career grand slam title, as she Brushed Aside Maria...

Johnson Olumide - February 17, 2020 0
Its finally out now, that Music, that song, that rap song with dope punchlines that makes you split fire like the rapper himself, the...