President Muhammadu Buhari has declared June 12 as the new Nigeria’s Democracy Day in honour of the late MKO Abiola, the presumed winner of the June 12, 1993, presidential election.
The President announced this in a statement issued via his Twitter handle on Wednesday, June 6, 2018.

He also awarded Abiola with the highest honour in the nation – Grand Commander of the Federal Republic (GCFR).

He said, “Dear Nigerians, I am delighted to announce that, after due consultations, the Federal Government has decided that henceforth, June 12 will be celebrated as Democracy Day.

“We have also decided to award posthumously the highest Honour in the land, GCFR, to the late Chief MKO Abiola.

“In the view of Nigerians, as shared by this Administration, June 12, 1993, was and is far more symbolic of Democracy in the Nigerian context than May 29, or even October 1”.

Dear Nigerians, I am delighted to announce that, after due consultations, the Federal Govt has decided that henceforth, June 12 will be celebrated as Democracy Day.
We have also decided to award posthumously the highest Honour in the land, GCFR, to the late Chief MKO Abiola. pic.twitter.com/VyYftmvWKA

The President also conferred a national honour on Baba Gana Kingibe and recognised the role of late Gani Fawehinmi in the actualisation of June 12 elections.

“Furthermore, the late Chief Gani Fawehinmi, SAN, a tireless fighter for human rights and democracy, and for the actualisation of the June 12, 1993 elections, will be posthumously awarded a GCON,” he added. 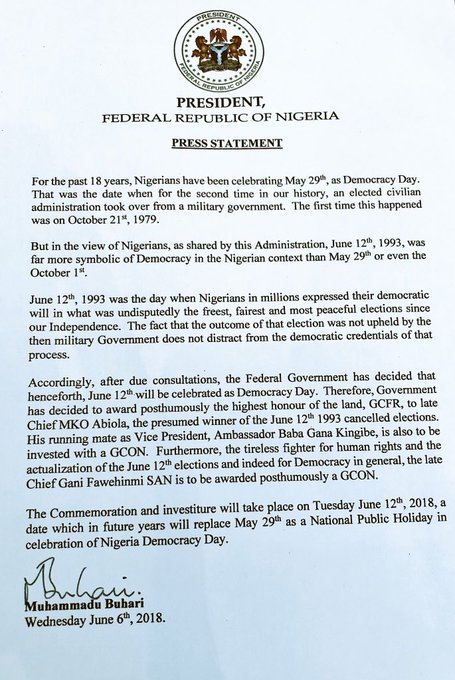 Buhari also acknowledged that the June 12, 1993, election was the freest, fairest and most peaceful election since Nigeria ever conducted since Independence.

“June 12, 1993, was the day millions of Nigerians expressed their Democratic will in the freest, fairest and most peaceful elections since our Independence. That the outcome of that election was not upheld by the then military Govt does not detract from its democratic credentials,” he said.

He said a commemorative and investiture event has been fixed for Tuesday, June 12, 2018.

“I was lead by the Spirit of God” – Former Aviation Minister, Fani-Kayode rejoins APC

Former President, Goodluck Jonathan may decamp to APC before the end of the week

Johnson Olumide - June 27, 2021 0
With the investigation still ongoing into the circumstances surrounding the death of the CEO, Super TV, Usifo Ataga, the prime suspect, Chidinma Ojukwu, during...

Adedokun Moses - January 24, 2020 0
Former big brother naija star, Frodd has stunned his fans and followers on Instagram with an hilarious throwback of himself during his University days. With...

Wizkid reacts after his fans beat up Shoki Shitta in Surulere over singing Davido’s...

Johnson Olumide - May 8, 2019 0
A video has gone viral of some Wizikd fans beating up Shoki Shitta for preferring Davido over Wizkid. In the video, the said guy...